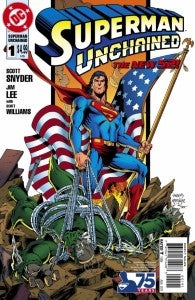 Earlier this month, DC Comics revealed that they were rolling out a batch of variant covers celebrating 75 years of Superman, scheduled to be pushed out with June's Superman Unchained #1 by Scott Snyder and Jim Lee. Today, the publisher revealed the full images over at Newsarama, complete with trade dress and prices, which showcase the fact that each of the comics will feature period-accurate trade dress, complete with different DC logos and decade-appropriate fonts. We've included a couple of examples below and at right, with Dan Jurgens's '90s variant, on which the hero sports the controversial Mullet of Steel, being our personal favorite...except for one little detail. At the time those creators were working on Superman, there were multiple monthly titles and there was some concern on the part of editorial (and probably retailers, as well) that fans would be confused and unable to follow three or four different books with different numbering. The idea of transitioning from one book to the other each week was the status quo at the time and not considered an "event" for the Superman (and Batman) books. 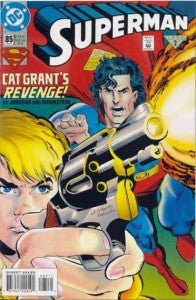 The system that resolved this was a secondary numbering system, with each issue featuring a small, inverted triangle on the cover that denoted its place in the annual reading order. For instance, if Action Comics came out on the first week of the month and Superman: the Man of Steel came out the second, those would be "1994 - 1" and "1994 - 2," respectively. In fact--what the heck? You can see the ACTUAL 1994-2, which was Superman, not Superman: The Man of Steel, and which was drawn by Jurgens, who did the image above, at left. Also, it features the aforementioned hairstyle on Superman, as it appeared in print at the time. Jurgens, who was considered by many the "primary" writer/artist on Superman during this period, tended to play the hairstyle down a bit more than other artists, particularly Superman: The Man of Steel's Jon Bogdanove, who would often give the hero a wild mane of hair. It's arguably because of that tendency (and that of some other artists who came on later to follow Jurgens's lead) that it's often referred to as a mullet (long in the back rather than all around). That long digression aside, these covers are terrific and the period-accurate trade dress is probably about 90% with each one, bending only slightly to more modern conventions. Check more of them out below. [gallery ids="51435,51436,51437"]