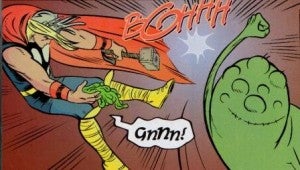 The forthcoming Superman Annual #1 and Wolverine and the X-Men #17, both slated for release soon, appear to have had last-minute creative team changes, according to Blog@Newsarama.

The Superman Annual, originally solicited as having been written by departed Superman writer Keith Giffen and drawn by CAFU, will now be written and drawn by a committee of creators led by incoming Superman scribe Scott Lobdell. Check out the updated solicitation information:

That one stinks of a last-minute change, doesn't it? Well, there's another change in the offing--this time at Marvel--and while it may still be a "save the deadline"-type change, it's hard to argue with the creative team.

Mike Allred, incoming artist (reportedly) of FF, will draw a fill-in issue of Wolverine and the X-Men, #17, out next month. Its release has been pushed back by a week, presumably to account for the time necessary to finish the last-minute replacement, but Allred will be reintroducing Doop, the fan-favorite character from his legendary run on X-Statix.

WOLVERINE AND X-MEN #17 original solicitation has been updated to reflect new artist, Mike Allred, a new story and a new on-sale date of 9/26 (from 9/19). Please note that this is NOT an AVX tie-in book. Below is the updated solicit:

Written by JASON AARON Pencils and Cover by MIKE ALLRED * Why is Doop at the Jean Grey School? * Find out the real reason that Wolverine brought Doop to the school and it will shock you! * More guest-stars than we have room to list here! 32 PGS./Rated T …$3.99

The issue is no longer an Avengers vs. X-Men tie-in (that issue is delayed until the next installment), but enjoy the image above anyway, which features Doop kicking the snot out of Thor.