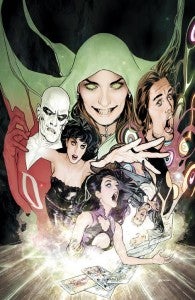 With the last week of the DC relaunch here, the last of the team books has hit the stands, and they couldn't be more different in tone and team makeup. This week sees the release of Teen Titans and Justice League Dark. The former represents a new start and chapter in the ongoing adventures of a group of heroes who may be young in age but who are mighty in power and history. The latter is an interesting new endeavor that combines some of the more mysterious and "things that go bump in the night" elements of the DCU. The two stories take different directions in storytelling, and the energy is certainly different in each. Based on these first issues, I have to give the edge to Teen Titans for a couple of reasons. First of all, let me say that there is definitely an audience for Justice League Dark. The book combines enough characters that have their own distinct fan bases and followings that pooling them all into a book like this is a good idea. So far we see Madame Xanadu, who narrates the mystical action of this story, John Constantine, Zatanna, Deadman and Shade the Changing Man. All of these various people are called together to take on Enchantress, a figure who has spiraled out of control and is using magic to take down the likes of Wonder Woman, Superman and Cyborg. The various characters begin to come together to battle her, and the issue ends on a predictably cryptic note. It is, after all, a book surrounded by prophecy and magic. The book felt strikingly similar to the way Justice League of America began a few weeks ago, and the book sometimes relies too heavily on the idea that magic has to always be mysterious and vague to pull out the story. I would be intrigued to read a second issue though. Grade: B- 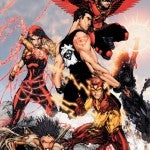 Over in the pages of Teen Titans #1, things get off to a frenzied start. Some young pest named Kid Flash is running around trying to save lives in between mugging for television cameras. The resulting "help" ends up causing more harm than good in this first issue, as a minor blaze becomes a roaring house fire. After this incident, we're shown a scene where Tim Drake, AKA Red Robin, is listening to news from all over the world about the rise in teenage metahuman activity. Several familiar faces are seen, and soon, Drake is off to locate Cassie Sandsmark, whom the media has dubbed Wonder Girl due to her recent activity and similarity to another famous female hero. Apparently, a group called N.O.W.H.E.R.E. is on the hunt for these teens, and both Cassie and Tim get to show off some power on the run from the group, but not all that much. It's a pretty tame beginning for a group of such high-powered kids. Reading Superboy #1 ties into this issue, but it's not a necessity to read it with this issue. Overall though, it's just a notch above Justice League Dark in establishing itself. Grade: B