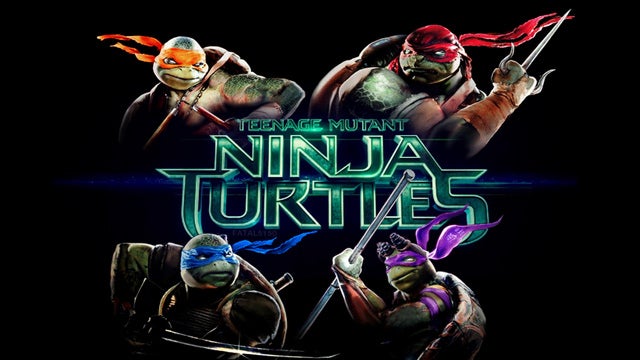 In some ways I have never gotten over the Turtles of my youth.

It's 1993 and I am five years old. I am a watching a TV show I have never seen before called Teenage Mutant Ninja Turtles. My small, amorphous brain reels at the conceptual mishmash before me. I know nothing about teenagers or mutants or ninjas. I know a little bit about turtles. But I know with certainty that these four distinct elements have come together to form some sort of mind-blowing mega-idea. At this point in my life, it is the greatest thing I have ever seen.

It's March of 2014. I'm watching the trailer for the new Michael Bay produced Teenage Mutant Ninja Turtles (and let's face it, it doesn't matter who the director is). This is after a year or two of rumors that the Turtles were no longer teen-aged, or mutants (now they're aliens!), or ninjas. It was hard to make sense of anything for a while. Turns out, the Turtles are all of the things they used to be, only now they look very homeless.

Now it's today, and the new film has amassed over 80 million dollars. At least five people on the internet have described it as a "turn your brain off and enjoy the movie" movie, which immediately indicates three things:

1) some people actually like having bad taste and/or exercising complete ignorance.

2) this movie is probably not good.

3) there is a massive audience for this movie (and others like it), no matter its content or merit.

So here's the question then: If the audience is there and it doesn't matter what shows up on the screen, why not make the movie good? Another question: Why hire the same people to churn out "blockbuster" after "blockbuster" if Hollywood has happened upon the great cinematic blank canvas of the early 21st century? That is to say, because Hollywood has found itself able to produce profitable films of low or questionable quality with impunity (TMNT is currently rocking a big red 34 on Metacritic) it has inadvertently created a framework within which it can innovate in spectacular fashion. A young (cheaper) filmmaker could make a Transformers movie about Optimus Prime joining forces with Tyler Perry's Madea to assassinate Justin Bieber and people would turn out in droves.

But those aren't the real questions.

I have absolutely no issue with the mining of our collective nostalgia. I simply do not care. When I hear someone bemoaning the lack of originality in cinema I nod and agree and invariably add a few well-worn points to support the "lack of originality" argument. And while I agree that originality is great, I also happen to really enjoy Batman and Star Trek--two franchises from two distinct eras (the tail end of the 30s and the 60s respectively) that have both seen media exploitation decades after the initial source material has debuted or ended. Sometimes new iterations of these properties come out and they're good. And sometimes they're (really) bad.

So when movies like J.J. Abrams' Star Trek (the first one, not Into Darkness) or Christopher Nolan's Batman Begins come out and wind up being really, really good, well, I just chalk that up to nostalgia successfully mined (Achievement Unlocked!). But when movies like the Total Recall remake or Man of Steel come out—stripped of all the qualities and concepts that the nostalgic people were keen on in the first place—and they turn out pretty terrible, then I must concede that originality should have won whatever boardroom argument led to their (re)creation.

This is the real question: What role do men like David Goyer, Roberto Orci, Alex Kurtzman, Damon Lindelof, Michael Bay, and Kevin Feige have in common?

They are all modern-day robber barons (or industrialists or capitalists or whatever you want to call them) of blockbuster film. And when I say blockbuster, what I mean is superhero. And though I mean superhero, I'm really thinking nostalgia.

Sub-point: I'm not much of a history buff, but I believe Michael Bay would be the Rockefeller of the group and Feige would be Carnegie. I like to think, though I have almost nothing to base this on, that Carnegie was more polite and less insane. Certainly, Kevin Feige is more polite and less insane than Michael Bay. But I'm almost certain neither of these two men, or any of the ones listed above, engage in the activity I'm about to describe.

I recently learned of a "sport" that combines two time-honored American pastimes. These are, of course, flip cup and slip'n slide. As I understand it, the goal is to pass through the slip'n slide as fast as humanly possible to get to a flip cup table at the end, drink the beer in your cup, and then flick the empty cup from a downturned position to an upturned position, which signals the next person on your team to repeat the process until either team expends its players. This activity seems like something a person in their senior year of high school would play. By that I mean, it seems creative. To put it another way, it seems like the people who developed this activity were being creative during a very specific period in their lives, a period in which people usually have a lot of free time on their hands and very little responsibility.

Flip Cup/Slip'n Slide is something I wish Michael Bay would do with his movies. If you know you're going to graduate high school and go to college no matter what you do and you have the time, know-how, and the elbow grease to create something that is going to make people very drunk, why not, as the kids say, go big or go home?

As I've said before, 2014 has turned out to be a tremendous year for film. Godzilla, Dawn of the Planet of the Apes, Edge of Tomorrow, Snowpiercer, and Guardians of the Galaxy have all proven to be (mostly) smart, entertaining, big films. These are all movies based off of existing licenses. And many of them are decades old. This makes sense from a business perspective. Why create a new IP that moviegoers aren't familiar with when instead, you can recycle Robocop or Total Recall or Conan? (My Paul Verhoeven/Arnold Schwarzenegger overlap game is strong.) 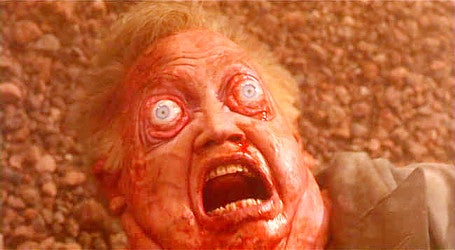 Nostalgia is memory. The act of its exploitation is neutral. But it is still a sensitive structure. Utilized without restraint or care, you're likely to gum up the works, if not monetarily, then certainly artistically. And that's the point. Teenage Mutant Ninja Turtles may be making money hand over turtle-fist right now, but will anyone watch this movie in ten years? Twenty? Fifty?

There's a scene in the new film that started making the rounds before the movie even came out. Part of me believes this was a studio ploy to get people thinking that maybe this iteration of the turtles wasn't so different than the one they know and love. It depicts the turtles crowded in an ascending elevator waiting patiently to exit so that their battle with The Shredder may commence. After a few seconds, the tone the elevator makes every time it hits a new floor begins to form a rhythm. Soon, Michelangelo is beatboxing. Then his brothers join in while providing instrumentation with their weapons. It's a funny sequence. When I watched it for the first time I laughed out loud. Then I stopped laughing.

This is because I'm afraid nothing else in this movie can be as good as that elevator sequence. Many people have said that this is only good part of the entire movie. Even if that's not true and there's enjoyment to be had elsewhere, there's one person's opinion I simply cannot ignore. No amount of nostalgia for the past will change my mind if his is already made up. I'm talking about myself, my five year old self from 1993, and I already know how he feels. Other people may dig it. I don't begrudge them their enjoyment. It's certainly made a lot of money.

But in some ways I have never gotten over the Turtles of my youth.