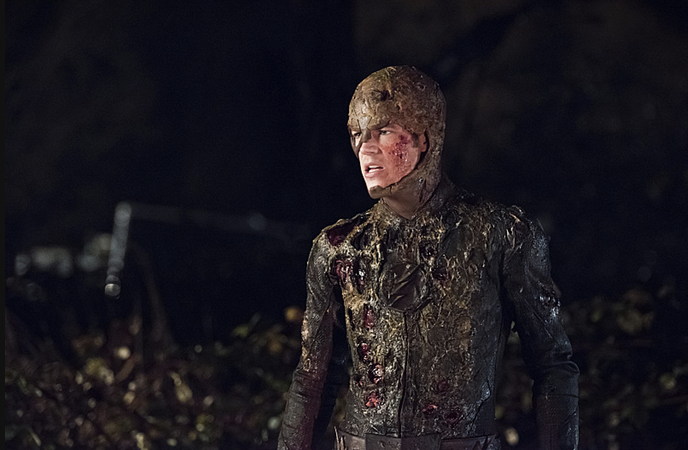 "Fallout" opens with The Flash and Caitlin outracing Ronnie Raymond/Professor Stein's nuclear explosion. Despite the nuclear blast, Cisco registers no radiation. Once they know that they're safe, Flash and Caitlin race back to the detonation site, where they find Ronnie alive and conscious. But more importantly, they also find Professor Stein. The two have separated, and seem to be fine.

All four head back to STAR Labs, where the real Ronnie and Stein meet with the rest of the group. It's a heartfelt reunion for Ronnie, but Stein—who's never met Wells or the group—wants to skip to business.

Elsewhere, a military bunker picks up on Ronnie's explosion. There, General Eiling is ready to do something about it.

In STAR Labs, Harrison Wells determines that since Ronnie and Stein have separated, they're no longer crying the nuclear power of Firestorm. Ronnie and Stein, who argue over their time spent in the same body, couldn't be happier to get away from each other. Professor Stein asks to be taken home to his wife, while Ronnie wants to get pizza. After Barry returns Stein to his wife, Stein thanks Barry for his help.

Barry then goes to the Central City Police Department, where he meets with Joe. Joe says he has something to show Barry, and leads him to the scene of his mother's murder. Joe reveals that he and Cisco did a forensic investigation on the house, and discovered that there were two speedsters in the house the night Barry's mother died. He then gives the real news: The blood Joe found on the house's walls belong to an adult Barry Allen. As Joe and Barry conclude, the Flash was at the Allen's house on the night of Norah Allen's murder, meaning that The Flash will eventually try to stop the Reverse Flash. Try outrunning that truth bomb, Barry.

Barry and Joe take the news back to Harrison Wells (The Reverse Flash) at STAR Labs. They ask Wells if time travel would be possible. The team discuss the possible theories on time travel, but Wells surmises that he has no clear grasp of it (or so he lets on).

Across town, Iris and her co-worker discuss STAR Lab's possible connection to Firestorm and Ronnie Ramond. The fellow reporter thinks that Caitlin knows more about the Particle Accelerator, Star Labs, and Ronnie Raymond than she's letting on.

That night, Barry visits Professor Stein to ask him about time travel. There, Professor Stein's wife says that Stein hasn't been acting like himself lately—namely, he's craving pizza (a favorite of Ronnie's, remember). After Barry delivers Stein a pizza, Stein explains that it's scientifically possible to travel through time, and to the past. Barry then tells Stein that 15 years ago, his mother was killed, and that he possibly traveled in time to try to prevent it. But Barry concludes that since went into the past, and his mother is still dead, it means that the Flash must have failed to save his mother.

Elsewhere Ronnie and Caitlin catch up over pizza. Ronnie wants to leave town, but before the couple can debate the issue, they're ambushed by General Eiling. As the stressful incident unfolds, Professor Stein feels the anxiety that Ronnie is currently experiencing. He tells Barry to go help Ronnie. When The Flash arrives, General Eiling subdues him with a special weapon designed for Barry's suppressed. It looks like Eiling is about to take Ronnie and The Flash in, but Caitlin peels in with her car at the last minute and gives them a not-so-clean getaway.

Back at STAR Labs, the group discovers that General Eiling wants Ronnie's body for his FIRESTORM project, which would create "the ultimate human weapon." Professor Stein shows up and offers to help the group take down the General. Until they devise a plan, Barry offers to let Ronnie stay at his and Joe's place. As Joe meets Ronnie, Iris enters. Barry, Caitlin, and Joe make a cover for Ronnie, not wanting to blow his position as half of the Firestorm matrix. Iris, who's already trying to peg Ronnie to Caitlin and STAR Labs, is suspicious.

Speaking of Firestorm, Harrison Wells go to question General Eiling why he's hunting Ronnie and Dr. Stein in the first place. Eiling says that the two, when fused into Firestorm, mark the future of human warfare and weaponry. As Wells leaves, Eiling invites him to turn Ronnie and Stein over whenever he pleases.

Across the city, Joe and Barry discuss the revelation of Barry's attempted intervention in the past. Barry asks Joe how he matched Barry's blood to the blood on the walls, knowing that Joe was looking to match Wells' blood. He tells Joe not to doubt Wells, but Joe is unconvinced.

Back at STAR Labs, Wells and Stein bond over a drink. But after sipping his drink, which Wells poured, Stein collapses. With Stein drugged and unconscious, Wells turns him over to General Eiling. Across town, Ronnie feels the Professor faint.

In STAR Labs, Wells fibs that Eiling's men subdued him and kindnapped Stein. The group has no way of locating Stein—except through Ronnie. They strap Ronnie up to a machine, which amplifies his connection to Stein. Ronnie senses cold, linking to Stein's imprisonment in a cold, damp basement. There, Eiling interrogates Stein, demanding that Stein turn over his notes on Firestorm. Stein refuses, so Eiling tortures him. Ronnie feels the pain back in STAR Labs. He begins cutting the message "Where?" in his skin, so that Stein can feel it in his own arm. It's how they communicate. Stein picks up on the engraving, and reveals his location in morse code. Ronnie recites the morse taps outloud, and the group locates where Stein is held.

Ronnie decides that he must go save Stein, despite the potential Risk that he'll re-merge with Stein. Before he leaves, Caitlin tells him to come back to her, and kisses him. The Flash runs Ronnie to the army base. When they get there, Wells warns Ronnie over radio that if he and Stein re-merge, they may never separate again. Ronnie then senses Stein inside. The Flash races in and recovers Stein, but is hit by weaponized phosphorus from one of Eiling's tanks. The only way The Flash can save himself is by running extremely fast. He bolts away from the action.

With the walls closing in on Stein and Ronnie, the two know that they must re-merge to save themselves. They merge successfully, with each mind equally in charge. The in-control Firestorm subdues Eiling's guards, but Eiling knocks Firestorm out with an ion grenade. Suddenly, Flash races back to knock General Eiling Out. With Eiling down, the Flash and Firestorm head home.

Back at STAR Labs, the two manage to separate once again. But with Eiling still out there, they know that they must leave Central City and seek solutions elsewhere. Ronnie promises Caitlin that he'll come back. The two re-fuse into Firestorm and fly off. Later that night, Cisco and Caitlin discuss what happened. Caitlin says now that Ronnie's back, she can move on with her life. Then Iris shows up. She questions Caitlin about Ronnie, clearly onto something, but Caitlin gives nothing. She seems suspicious enough though, which makes Iris agree to help her fellow reporter with his investigation.

Back at Eiling's base, Eiling is abducted by The Reverse Flash. Reverse Flash takes Eiling down into the sewer, where he reveals himself as Harrison Wells. Wells then turns Eiling over to Gorilla Grodd, who drags Eiling away and (presumably) murders him.

The Flash Recap With Spoilers: Fallout