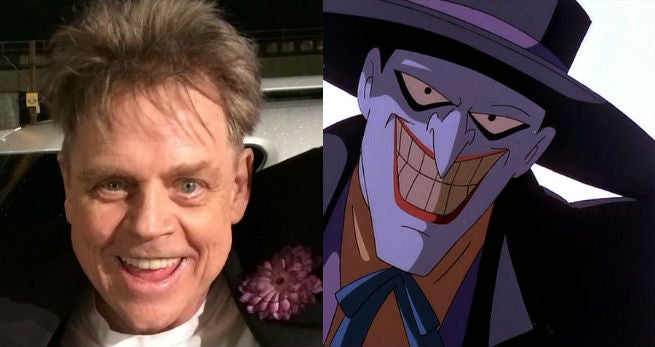 One would think that playing Luke Skywalker in the Star Wars trilogy is the kind of role that lets an actor more or less write their own ticket for the rest of their career, but according to Mark Hamill, he was worried he would miss out on another iconic role as a result of playing the character.

During an interview earlier today with reporters in Burbank, the actor -- who will guest star on Tuesday's episode of The Flash -- said that his long-running voice role as The Joker in Batman: The Animated Series and a number of follow-ups was one he didn't believe he could get since the character was so diametrically different from Luke Skywalker that it would have been difficult to market.

How did it come up? Well, here's a brief excerpt from a much longer interview with Hamill and The Flash showrunner Andrew Kreisberg, the remainder of which will run closer to the episode's airdate on Tuesday.

So who would win in a fight, The Trickster or The Joker?

Gee, that's a tough one. You know, I played The Trickster before I ever voiced The Joker and people asked me, "Is that what made them think of you for the animated series?" And it's not. I mean, as you probably know, the television department and the movie department and the animation department are all separate entities and they doin't really coordinate. I had read about them doing the animated series and the benchmark they were aiming for were the Max Fleischer Superman cartoons. And Paul Dini was involved, so I said, "Oh, boy, they're going to get this right." There were sixty-five episodes ordered so it would be able to go beyond just the villain of the week. He could be a detective, he could do mysteries, he coudl do gothic horror, he could do all kinds of things.

So I said to my agent, "I just want to be on that." And they gave me a part in the "Heart of Ice" episode, which was the first Mr. Freeze. It won an Emmy, that script, because when I read it I thought, "Wow, this is really melancholy." And deep for a children's cartoon where the empathy is all with the villain who is trying to find a way to preserve his wife who has this fatal disease.

So they just gave me that, and I just went in with full fanboy flags flying. I just nerded out. I knew all the characters. And it wasn't really a character role. Michael Ansara played Mr. Freeze and it was difficult for him because he's not really a comic book fan and they kept telling him, that's too much emotion. He's a passionate actor.

Anyway, I did that, and -- actors, they're never satisfied. I got on the show, and it was like, "How come I'm not Mr. Freeze?" And I guess they thought of me later down the road when they decided to cast The Joker. Unlike the first episode that they just gave me, that one I went in and I read for. And part of the reason I felt like I was in the right frame of mind is that I said, there's no way I'm going to get this. They just will not cast the guy who played this icon of virtue, this sort of farm boy puppy dog guy, with this arch icon of villainy. There's just no way. From a public relations standpoint, I can't get this. So instead of being nervous about it, I went in thinking, "Since they can't hire me, I'm going to make them really sorry that they can't." And as I'm driving out of the parking lot, I'm thinking, "Ha! Top that! That's the best Joker they're ever going to hear!" Really cocky and full of myself.

And of course, ten days later I got the call, they want me to be The Joker. And I was like, "Oh no! I can't do this!" She said, "Why not?" I said, it's too big. Joker's too big. If I were Two-Face or somebody down the line.... I said, I know the fans hear it in their head. There's no way I can satisfy that. I can't scratch that itch. I went 180 degrees in the other direction.

So I'm driving into the first recording and I don't even remember what I did! I'm practicing the laugh on the way to the studio, forgetting that they have reference tapes that they can play.

In Los Angeles, by the way, no one bats an eye if you're laughing maniacally behind the wheel of your car.

But they really weren't connected. It's just fun. I feel so lucky to be involved in projects that are things that I loved when I was a kid. I remember watching Walt Disney, where they would show you how cartoons were made, with Clarence Nash doing Donald Duck. So at seven or eight years old, I thought, "Wow." It made me watch cartoons in a completely different way. Or like, that guy on Jack Benny! That's Bug Bunny! I recognized Mel Blanc, I bought comedy records, I learned the names of June Foray and Daws Butler and people that I really loved. I aspired to do cartoons. I got to it fairly late in my career. I did one when I was a teenager but then I didn't work in animation for twenty years and then I did Joker.

But boy, is it a great job! It's the ultimate lazy actor's job: You don't have to memorize your lines, you can come in looking like hell. They don't care how you look; they care about how you sound. And the people involved are just so grounded. They're just so talented. It's cutthroat like any part of show business but I think proportionately, there's a lot of really nice people in voiceover and I love it.

Xbox Fans Call For the End of Xbox Live Gold