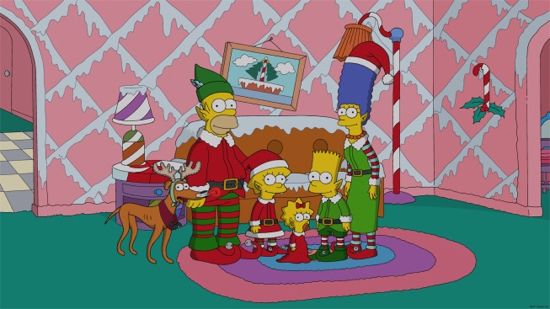 Fox is airing two back-to-back episodes of The Simposons tonight. In “To Cur With Love,” when a fire at the retirement home forces Grampa to move back in with the Simpsons, Homer throws out his back on moving day. While “resting” at home, he gets hooked on the super-addictive tablet game, “Villageville.” And, in his distraction, he loses the family dog, Santa’s Little Helper. Everyone is angry with Homer for not seeming to care about the missing dog, but Grampa tells them the story of Homer’s long-lost childhood pup, Bongo.

In the “White Christmas Blues,” Springfield is inundated with holiday revelers after the nuclear power plant springs a radiation leak, causing snow to fall all over town. When the tourists drive up Christmas shopping prices, Marge (Julie Kavner) opens up the Simpsons’ house to boarders. Voice Cast includes Dan Castellaneta as Homer Simpson, Julie Kavner as Marge Simpson, Nancy Cartwright as Bart Simpson and Nelson, Yeardley Smith as Lisa Simpson, Harry Shearer as Skinner, Pamela Hayden as Milhouse and Jimbo, and Tress MacNeille as Dolph.

The Simpsons: To Cur With Love & White Christmas Blues