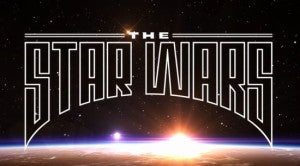 While it's going to be a long time before the first official trailer for Star Wars Episode VII gets released, there has been a new Star Wars trailer of sorts just released. Earlier this year at WonderCon, Dark Horse Comics announced that they would be publishing a new mini-series based on George Lucas' first treatment for Star Wars.

The original treatment for Star Wars called The Star Wars had some very big differences from what actually made it onto the big screen. In The Star Wars, Luke Skywalker was an older Jedi General and Han Solo was a six-foot-tall lizard. While many of the character names are the same even if the characters themselves are very different, The Star Wars does center around a character named Annikin Starkiller, who wasn't in the original Star Wars. Star Wars most recognizable villain Darth Vader is also just a general in the Imperial army.

The first issue of the eight-issue mini-series for The Star Wars is set to be released in comic book stores on September 4, 2013. J.W. Rinzler, executive editor at LucasBooks is writing the series with Mike Mayhew providing the artwork. But instead of just reading about it, check out The Star Wars trailer below, which was just released by Dark Horse Comics (via USA Today).