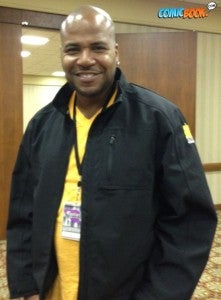 Vincent M. Ward played Oscar on The Walking Dead. Oscar was one of the five prison inmates introduced in the Season 3 premiere. Both Oscar and Axel were the only two prisoners that wound up becoming part of Rick’s group. Oscar is killed while helping Rick’s group rescue Glenn and Maggie from Woodbury.

Comicbook.com caught up with Vincent M. Ward at Fandomfest in Louisville, Kentucky last weekend, and we asked him about his experience on the show. Vincent M. Ward said, “My experience was great. Everybody was professional. You definitely had to bring your ‘A’ game, no egos, and that ran from the directors to the producers to the actors to the crew, great experience.”

In regards to current projects, “You can catch me on this new show called Wilfred. Well, it’s not new, second season. Psych, on its eighth season. I just shot a LeBron James commercial for Nike and a Master P video. Everybody’s familiar with Master P from back in the day, legendary rapper, new song called ‘Letter To My Daddy.’ Still doing a lot of plays, one of the plays is coming straight to BET this fall.”

When we asked if there were any other comic book roles he had considered, Vincent M. Ward said, “You know what, this was my first comic book role. Honestly, I wasn’t familiar with this world. My first con, I was like ‘What is this?’ I was caught by surprise, but I had a great time. I love meeting and greeting and talking to the people.

When we asked if there were any comic book roles he was specifically interested in, Vincent M. Ward said, “I’d be in any one, that means you’re working. It really doesn’t matter to me, man, my whole thing is I just want to work.”