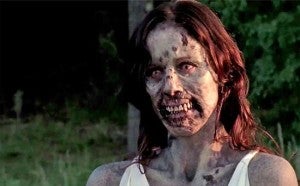 Here's one that is bound to get the conspiracy theorist going. During Season 3 of The Walking Dead, it was inferred that Carl Grimes put a bullet in his mother Lori Grimes' head to keep her from turning into a zombie, but the actual shooting was not shown on television. Further complicating matters, when Rick Grimes went to retrieve Lori's body, it was hinted that she had already been devoured by a walker with a rather large belly.

Since Lori's dead body was never shown, there has been rampant speculation that she either might still be alive or that she might now be a walker herself. In a new deleted scene from The Walking Dead Season 3 DVD/Blu-Ray shared by EW, Lori Grimes is actually shown as a zombie. However, the scene in question is from the "Home" episode where Rick sees a vision of Lori in a white dress on a bridge just outside the prison. After Rick goes in for a passionate kiss, he pulls back from the romantic moment to see that Lori has transformed into a zombie.

Of course, this is not exactly proof that zombie Lori is out there wandering around somewhere, but it's sure likely to reignite speculation. The Walking Dead: The Complete Third Season DVD/Blu-ray is set to be released on August 27, 2013. Check out the deleted scene video on Entertainment Weekly.

The Walking Dead: Lori Returns As A Zombie In Deleted Scene