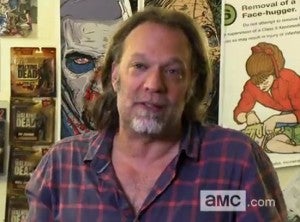 The Walking Dead Season 4 will consist of 16 episodes, which will run for one hour each. Scott M. Gimple is the new showrunner for Season 4, replacing Glenn Mazzara who was the Season 3 showrunner.

Special effects makeup supervisor and executive producer Greg Nicotero is the director for The Walking Dead Season 4 premiere. In regards to the premiere, Greg Nicotero said, “It’s a tremendous honor. It’s bigger than any script we’ve ever done before.”

Nicotero also said, “In the first episode this season, one of the guys in my crew was like, ‘You did every gag that you ever did in three years of The Walking Dead in one episode.’ We had walkers. We had mummified corpses. We had puppets. We had zombie bites… There was even a couple of gags that we came up with on the fly — there was a couple of sculptures that my guys in Los Angeles had done and I said, ‘Oh yeah, that’s a great walker.’ Where people are like, ‘What are the iconic walkers for season four going to be?’ I’m like, ‘Well, you’ll just have to see!’”

Following “The Walking Dead” season premiere will be the third season debut of AMC’s live after show “Talking Dead” at 10pm ET/PT, hosted by Chris Hardwick.