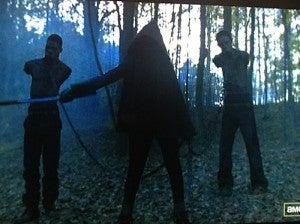 After the first twenty minutes of mayhem settled, AMC's The Walking Dead finale last night raised a number of questions that TV fans (especially those who didn't watch Talking Dead last night) will have to wait more than six years to learn the answer to.

As a public service, though, we've got some ideas here for you.

For fans of The Walking Dead comic books, it's possible that this article will be largely redundant...but sometimes those of us who have been reading Robert Kirkman's zombie mayhem masterpiece for eight years have to realize that we're vastly outnumbered by those who simply found it on television one day.

Who is the hooded mystery woman?

Wow, comic book fans have heard that one before, haven't we? But it seems unlikely that this will be Pandora.

No, actually, it was confirmed by executive producer Robert Kirkman on last night's episode of Talking Dead that this is indeed Michonne. In the comics, Michonne is a born survivor. Strong, smart and badass, the sword-wielding former attorney has been one of the most anticipated additions to the cast of survivors.

Kirkman says that while the show has so far been about the group trying to figure out how to survive in the world of The Walking Dead, Michonne is the first character introduced who already has it figured out. She also proves that zombies aren't so scary when they've got no arms or jaws.

What was the structure shown at the end of the episode?

Again, Kirkman covered this on Talking Dead, but since that show's ratings are only a very small fraction of those of The Walking Dead, it's worth touching down upon.

The structure is the TV-ized version of West Central Prison in Georgia, which was the setting for three years' worth of comic book stories. For context, that's something like six times as long as Shane Walsh lasted in the comics.

We'll see if it lasts that long on TV. While the Greene Farm lasted less than a year in the source material and was home to the survivors for a season of television before it no longer served their needs, the prison seemed an idea place to set up for a while in the comics. Numerous walls and other ways to protect themselves from walkers, lookouts for snipers and more provided a place where the survivors could not only live, but begin to really set up a community--and stretch their legs beyond just a campsite. Of course, that kind of peace and quiet is exactly the sort of thing that got TV viewers up in arms about the "boring" first half of season two, so it seems somewhat unlikely they'd stretch the concept too far on AMC.

Why was Lori mad at Rick?

This, too, was explained on Talking Dead. In a nutshell, Kirkman and executive producer Glenn Mazzarra said that she's really mad at herself.

She's the one who had the affair with Shane, who pushed Rick into conflict and who seemed to push Shane over the edge with that last "it's over" speech shortly before he kidnapped Randall. She blames herself for the death of someone she loved--someone who meant a lot to her son--and for the fact that her husband was forced to kill his best friend in order to clean up her mess. The fact that her son had to follow it up by killing (again) someone who was like a father to him only compounds the guilt and shame.

Plus, for those who are willing to take Rick and Lori's comments at face value, it's worth mentioning that her baby (don't click on that link unless you want some serious potential spoilers)--at least in the comics--has been confirmed as Shane's. It's never completely established on the page, but at one point an official website listed him as the baby's biological father and Rick as the adoptive one. So...there's that.

If everyone is infected, how does that work?

Without the CDC plot beat ever happening in the comics, the revelation that everyone is inherently infected by whatever the plague is that changed the world isn't one that's been dealt with directly. That said, it seems likely that something either genetic or viral is latent in all mankind, and that either death, or being bitten by the infected, will "activate" the infection in the same way that traumatic events have been known to activate the X-factor in Marvel mutants.

Asked during last night's Talking Dead Aftershow whether he thought Shane's (and now Rick's) dead-eyed instability and aggression might be linked to the plague, Kirkman evaded the question.

What's with the helicopter in Atlanta?

While Laurie Holden, who plays Andrea, told fans on Talking Dead that she thinks the helicopter represents hopes for the survivors, it'll be interesting to see how it plays out, assuming that it does on screen. It's not clear during the opening sequence that the helicopter which passed over Atlanta in this episode is different from the one (or even at a different time) than the one in the pilot episode.

That said, the corollary in the comics crashed and (spoilers here) became one of the things that really establishes the nature of Woodbury's Governor, who will serve as the season three "big bad."