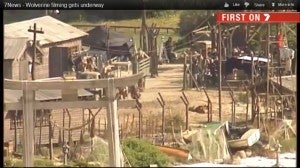 In this day and age, it's not surprising for films to see footage leaks from fans with cell phone cameras, but it's somewhat less common to see a major Hollywood feature getting professionally-shot set footage on the first day of filming.

That said, an Australian news crew provided fans with their first look at the set of the new film, in the city of Kurnell where the filmmakers have set up a Japanese prisoner of war set. The film, which is set primarily in Japan, is adapted from the classic '80s Wolverine stories by Chris Claremont and Frank Miller.

Notably, a sign on display near the set announcing road closures and that the film shoot is happening appears to match up with the logo on a poster that leaked back in March. At the time (and since), the provenance of the poster, which was claimed to have been photographed hanging in director James Mangold's office, was unknown but that logo appears to lend it credibility.

The news report, which includes footage from last week's press conference featuring star Hugh Jackman and the Australian Prime Minister, is expected to pump around $80 million into the local economy, according to the report.