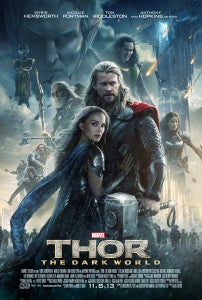 IMAX Corporation and Marvel Studios announced today that Thor: The Dark World will be digitally re-mastered into the immersive IMAX 3D format and released into IMAX 3D theatres internationally beginning Oct. 30. The film opens in the U.S. on November 8.

"Like all the dynamic Marvel characters, Thor has developed a massive global following, and we look forward to moviegoers experiencing this highly anticipated next chapter in IMAX 3D," said Greg Foster, CEO of IMAX Entertainment and Senior Executive Vice President, IMAX Corp. "We're excited to continue to build on our flourishing partnership with Marvel and Disney with this iconic property."

"All the nine realms will be stunningly displayed when Thor: The Dark World arrives in IMAX 3D," said Dave Hollis, Executive Vice President, Theatrical Exhibition Sales and Distribution, The Walt Disney Studios. "We continue to have great success with IMAX and are thrilled to once again work with them to bring the Marvel Universe to life in this premium format."

The film was not shot in IMAX but will be converted to the immersive format using high quality digital remastering technology.