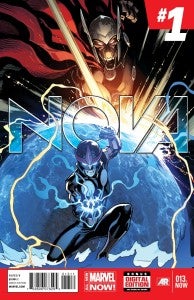 Beta Ray Bill, one of the oddest-looking and most beloved Marvel characters, will play a key role in Nova starting with #13 (which will have the All-New Marvel Now #1 in the corner) from writer Gerry Duggan and the art team of Paco Medina and Juan Vlasco.

"My first big arc begins in Nova #13 – we use #11 and #12 to build up the seeds of the confrontation, as Sam does a good thing for the wrong people. In doing so, he unwittingly assists the bad guys so Beta Ray Bill comes to Earth and demands some answers," Duggan told Newsarama. "It’s more than a little dust-up, as miscommunication leads to a pretty fun fight that might surprise some people. That kicks off Nova #13 and is a great jumping-on point for new people. People can get to know Sam pretty quickly. Then in the ensuing arc we follow Sam and Bill into space as they try to clean up Sam’s mess."

The issue will hit in February, as the big All-New Marvel Now push starts to really take off.