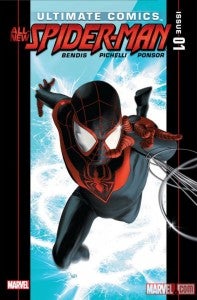 Ultimate Comics Spider-Man #1 swung into comic book stores today revealing the origin of Miles Morales as the new Spider-Man. As the world now knows, Peter Parker is dead, but a half-black, half-hispanic teenager named Miles Morales has taken on the role of Spider-Man. The big question though has been exactly how Miles Morales came to wear the spider-suit. Ultimate Comics Spider-Man #1 is a fast-paced origin story, but it also much more. In giving us the first extended look at Miles Morales, writer Brian Michael Bendis shows the huge potential of the character. Miles Morales is a guy with which many readers will feel an instant connection. Like Peter Parker before him, Miles Morales struggles with real-life problems. In one of the first scenes involving Miles, his parents drive him to a lottery for charter schools. While Miles hardly speaks during the entire spectacle, artist Sara Pichelli masterfully lets Miles' face tell the story. After the lottery, Miles spends time with his somewhat shady Uncle Aaron. 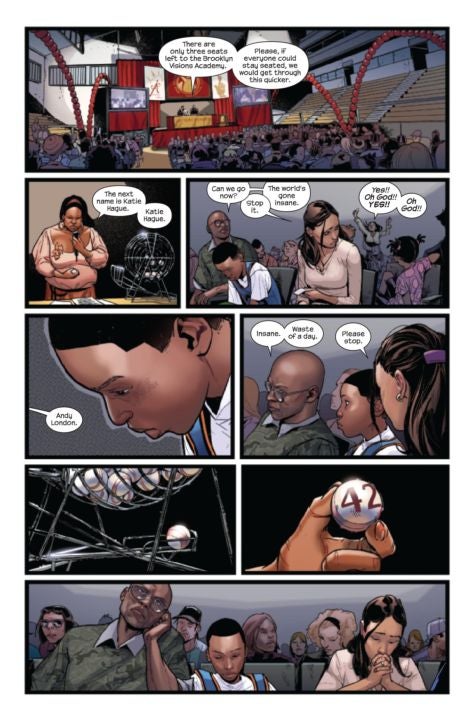 Uncle Aaron is an interesting character in his own right. Even though it's clear that Uncle Aaron has come into money by ill-gotten means, it's obvious that he also really cares about his nephew. The argument that takes place between Uncle Aaron and Miles's father is one of my favorite scenes from the comic, as it plays out the real tension that can often take place between brothers. Ultimate Comics Spider-Man #1 also ends with a real shocker, as it's revealed that Miles Morales has a certain power that the original Peter Parker never had. With the origin story showcasing the inevitable bite by the radioactive spider out of the way, I can't wait to see where Bendis takes Miles Morales next. The first issue definitely left me wanting to see more of this amazing new Spider-Man.