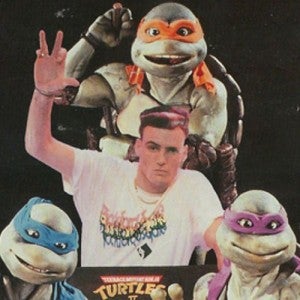 It looks like there might be one person who isn't upset over Michael Bay transforming the Teenage Mutant Ninja Turtles into aliens. Vanilla Ice, who famously rapped "Ninja Rap" in the Teenage Mutant Ninja Turtles II: The Secret of the Ooze, doesn't seem to care that the Turtles might become aliens. Vanilla Ice has been campaigning on Twitter to get a new version of his classic "Ninja Rap" in the upcoming Teenage Mutant Ninja Turtles movie. Vanilla Ice tweeted, "We have to campaign for NINJA RAP 2 for the new movie -- so awesome !!! NINJAS RULE !" When informed that Michael Bay was turning the Turtles into aliens, Vanilla Ice tweeted, "Aliens or not they are still NINJA'S !!! Represent !!! Whoop whoop !" So as long as the Turtles are still ninjas, Vanilla Ice is ok with them being aliens instead of mutants. But, Ice, Ice, baby, why would aliens need to be ninjas? Wouldn't they just zap the Shredder with their rayguns?