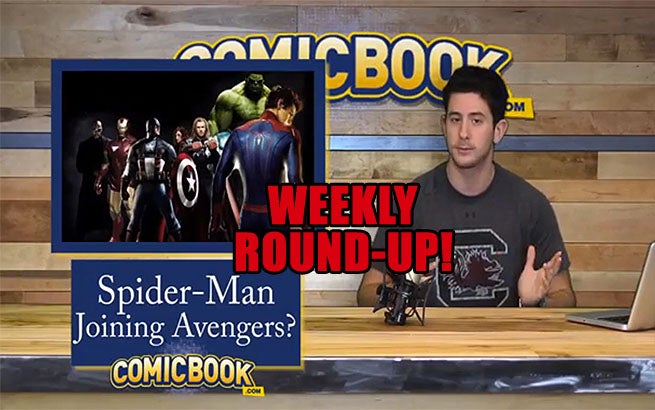 Welcome to another edition of the Weekly Round-Up. It's the end of an exciting week. We had the Oscar announcements, we've got 4 movies hitting theaters (Blackhat, Wedding Ringer, Still Alice, American Sniper), but we got some huge news over the week, so we rounded up the biggest stories for you here.

First, we got a look at what's in store for our beloved Walking Dead characters when AMC released an intriguing new promotion for the second half of the Walking Dead's fifth season. A couple of noticeable things- Rick's beard is massive, it's very cold, and Carl and Judith are absent.

Then! Marvel released a brand new trailer for Avengers: Age of Ultron! The entire internet exploded with excitement and despite being given a bit more insight to the plot, we have a whole lot of new questions and mystery characters. If you haven't seen the trailer yet, we have it for you at Comicbook.com, you have to, and we also have a video breakdown analyzing extra details.

Spider-Man head back to Marvel?

A rumor spread across the inter webs like wild fire. An article on the typically credible site, Latino Review, claimed that Sony and Marvel had agreed to a deal that would allow Spider-Man to join his Avengers team in the movies. While no official confirmation has been made, this did spark a huge debate in the Spoiler Room about who could play Spider-Man in the Marvel Cinematic Universe.

Recasting continues as Tom Hardy dropped out of the 2016's Suicide Squad. Not because Hardy didn't want to be a part of another DC film, but like because his film schedule with Alejandro Innarito's Reverant conflicted with Suicide Squad. It's all good, though! Because apparently Jake Gyllenhaal is up to fill the Rick Flagg role, and if you've seen him lately, he'll fit the part.

This week Marvel announced the Death of Deadpool, after teasing it to us here at Comicbook.com over an interview a few weeks ago. Gerry Duggan, who co-writes the series, confirmed that Deadpool 250 will be the last of the ongoing series and hopes and believes that readers will feel it is an "appropriate ending for Deadpool."

It was a huge week, so much to talk about. Hit the comment section and let us know what you think about these Spider-Man rumors? Who do you think would make a good Spider-Man? How about Gyllenhaal for Rick Flagg?