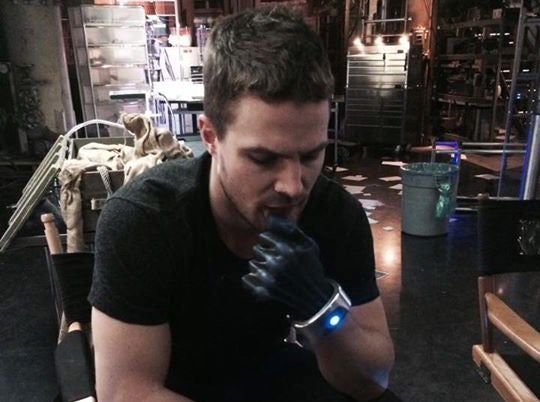 Arrow star Stephen Amell has posted an image of himself sporting some curious new accessories, possibly teasing fans about upcoming episodes of the CW series.

In the image, Amell is wearing a wrist band and knee bands with glowing blue lights at their center, and a black glove. It's possible that the bands are some sort of technology upgrade from the ArrowVerse's latest costumed adventurer, the Atom. Since the Ray Palmer made his debut last week as an official superhero, it's not a stretch to think that he might cross paths with Oliver soon, and pass a gift to Starling City's hero.

Or, the tech might hail from Central City. As last year's Flash/Arrow crossover established, STAR Labs' resident scientists Cisco Ramon and Caitlin Snow are eager to help The Arrow with as many upgrades as possible.

Then again, maybe the equipment has no link to the DC Universe, and is simply some sort of motion-capture technology. Perhaps Oliver will go through some physical alternations that can only be realized in the post-production phase? Let's hope they're not lopping that hand off.

What do you think Amell is wearing? Share your theories in the comments below.

What Is Arrow's Stephen Amell Wearing?