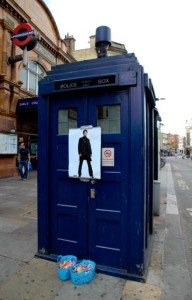 Yesterday, ComicBook.com was one of many websites reporting on a tweet by Supernatural star Misha Collins, who strongly hinted that he was set to become the Twelfth Doctor when The BBC announced the new star of Doctor Who earlier today. Collins, of course, was just having a little fun at Twitter's expense--and it worked. His tweet was retweeted and favorited hundreds of times and he made the front page of nearly every geek-culture site, with different writers taking his claim of a major announcement regarding "The U.K. and phone booths" with different degrees of seriousness. We wondered at the time whether he had any announcement to make at all--and it turns out he did! "I'm can't wait, i'm ready to make my announcement... I've left some treats for u at a phone booth near the Magna Carta pub, in Lincoln, UK," the actor tweeted earlier today, along with the photo at left. He later added, "Yesterday I said I had an announcement regarding the UK & phone booths. Well, the announcement is treats at UK phone booths! Isn't that great? There are more for u in earls court at this lovely blue booth," and a second picture. He added:

And what is this term I keep seeing repeated in my timeline: "troll?" What's that? — Misha Collins (@mishacollins) August 4, 2013

I admire peter capldi's gall trying to pass as a doctor! (I happen to know for a fact that he didn't attend medical school.) — Misha Collins (@mishacollins) August 4, 2013

What Was Misha Collins's Doctor Who Tweet About, Anyway?