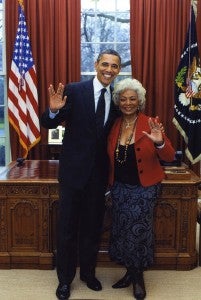 President Obama is the first "geek" President of the United States, with a documented love for things like Conan the Barbarian and Spider-Man. Occasionally this means he gets to hang out with his childhood heroes, and last week was another one of those times. Actress Nichelle Nichols, who portrayed Uhura in the original Star Trek television series, visited the Oval Office on Thursday and, yesterday, posted a photo of herself with the President of the United States to her Twitter page. The rub? Both of them are delivering a Vulcan salute. Let's just hope the Romulans don't take this as a sign of aggression.