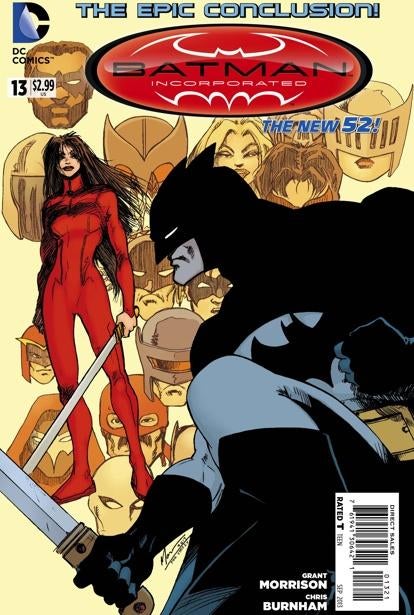 With all the controversy over Superman's increasingly-deadly methods on the page and screen these days, DC's other biggest icon--Batman--has come off looking comparably good.

It's rare, really, that people talk about Bruce Wayne as the stable one, but there you have it.

In any case, we do wonder whether that run might end this week, as Batman squares off against Talia al Ghul--the woman who killed his son--with a deadly weapon in hand as part of the long-awaited finale of Grant Morrison's epic run on the titles.

Batman Incorporated #13 features the Caped Crusader and his Batmen of the World facing off against Talia al Ghul and her minions. It's an interesting challenge for Batman to face at this juncture, since Damian Wayne--the son introduced in Morrison's first arc on Batman in 2005--was both created by, and then (indirectly) killed by Talia.

She's also, if you remember your movie history, been set up in the recent past as a master manipulator and one of Batman's all-time greatest foes. Also if you remember The Dark Knight Rises, Talia is killed during their big, final conflict.

That is, of course, no indication that a writer--particularly one who likes to go his own way as much as Morrison does--will do something similar, excepting perhaps that Morrison has an appreciation for history and legacy, and understands that the characters he writes are living organisms for whom "history" and "legacy" are evolving things. It's not implausible that he could embrace the mythology of the films a little bit, especially as so much of his run has been about embracing all of the character's history, bringing it together on the page and then--according to his own account--putting the toys back on the shelf at the end of this week's issue.

As in the films, after all, she's essentially taken over her late father's empire and is working in his stead to bring down Batman.

In one of the most emotionally-charged and, arguably, historically-significant battles in Batman's character history, he's fighting with lethal weapons (swords) rather than his more typical hardware. That he's using a lethal weapon does not, by any means, guarantee that he will do so with lethal force, but it certainly suggests the option. Certainly, he was in that state of mind after The Joker killed Jason Todd--who presumably meant a bit less to him than Damian did.

Will Batman Kill This Week?