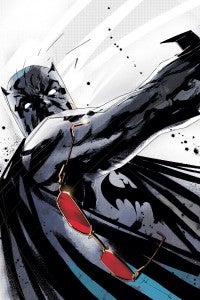 When the New 52 launched and long-running titles like Action Comics, Detective Comics, Superman and Batman were reset to new #1 issues, there was much wailing and gnashing of teeth on the part of fans who felt the long histories of those comics were being discarded and ignored for a gimmicky relaunch. Around that time, questions about whether the series would return to their original numbering in recognition of milestone issues like the upcoming 900th issue of Detective Comics were met with a pretty solid "no." Next month, though, sees the 900th monthly issue of Detective Comics (the series ended at #881, and both that volume and this new one set in the New 52 have had #0 issues, plus a #1,000,000 in the original series) and, even if you discount those special circumstances, it's April when Detective Comics #19 is coming out and will mark #900 through simple addition. And so, of course, a fan reached out to Dan DiDio via Facebook to suggest a 900th issue spectacular--and got a surprising response. "Don't worry," DiDio said. "We checked [the math] too." Sounds as though there's something--likely not a #900, per se, but something--planned. Possibly an annual timed to coincide with the anniversary, with work by a number of former Bat-luminaries? Or is that too much to expect?