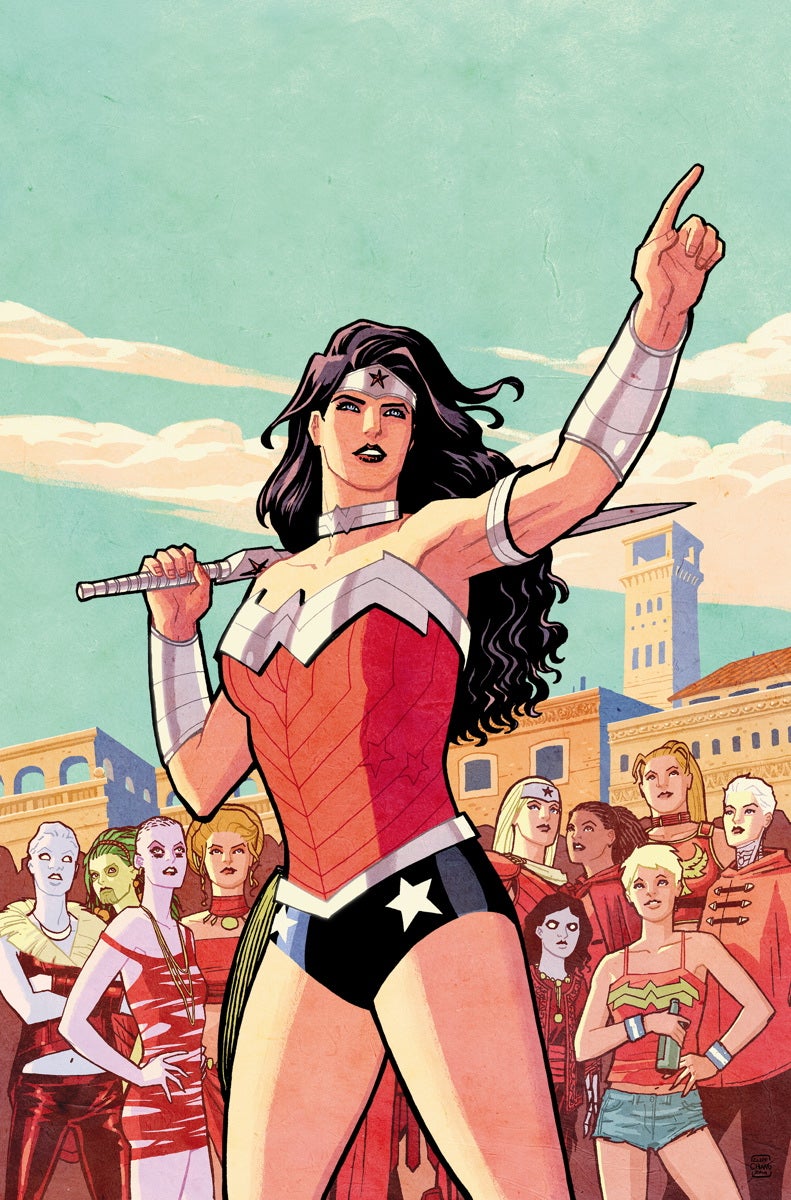 The announcement of the New 52 promised something big. It promised an opportunity for the characters and properties at DC Comics to be imagined anew by some of the best creators in the industry. It promised a fresh starting point with exciting perspectives. DC Comics’ delivery on this promise is debatable, but no title has succeeded in fulfilling it better than Wonder Woman.

Brian Azzarello and Cliff Chiang offered a compelling vision starting with their very first issue. It was focused on questioning Wonder Woman’s role in the world, asking how she could balance her penchant for violence with virtues of love and mercy. All of this was accompanied by the absolute best new designs of the entire New 52 line and some incredibly well composed action sequences. Azzarello and Chiang have been a dynamic pairing from the very start. In their final issue they bring all of the same elements together again, bringing the story full circle.

Wonder Woman has featured an ever-widening scope as it has continued. The story moved far beyond the exploits of Diana alone in order to incorporate the classic Greek pantheon, the bastard children of Zeus, and even Kirby’s Fourth World. Here the story returns to its roots. With most of the expanded cast provided with a conclusion in the previous issue, Wonder Woman #35 is able to focus almost entirely on the same set of characters who appeared in the first issue.

That sharp focus allows for the recognition of just how much each of these individuals has grown and changed over the course of the series. The various betrayals, defeats, and hard choices of their journey have clearly taken a toll and shaped who they are. Now in the final moments, when everything is at stake, their growth is tested. It’s tense and uncertain. Besides the titular character, no one is safe. Ever since the death of Lennox, midway through the series everything has felt more dangerous and that is never truer than in these final moments. Azzarello has invested almost as much time in Zola and Hermes as he has Diana herself, so their outcomes feel every bit as important.

Azzarello has shown before that he can masterfully weave together a conclusion that delivers on all of the promise of a long form story. 100 Bullets #100 remains a near perfect issue that encapsulates the many character arcs and ideas of that series. Parts of Wonder Woman #35 feel rushed. Mysteries and twists are revealed in quick succession in order to bring everything together. None of the moments fail to work, but the issue certainly could have used an extended page count in order to let them breathe more. As it stands, some big moment are lost in the shuffle in order to reach the desired ending before space runs out. The plot still manages to land the necessary concluding beats for its characters and the central ideas of the series though.

Although they have not confronted the concepts of love and submission in the same overt nature as William Moulton Marston, Azzarello and Chiang’s Wonder Woman has centered on them just the same. That subtlety is broken here in the final issue and the conclusion is writ large (and obvious). Diana acts out the core of her ideology and provides a thesis statement for the series. Her final act in this issue puts all of these ideas into perspective. Love, mercy, submission: they are all there and brought to the forefront in a single heart wrenching moment.

Identity has also been a central concept within this series; one that has been called ever more into question after Wonder Woman killed Ares and became the God of War. Many things in this series, her parentage, unique gifts, godhood, and relationships have worked to define Diana. Here Azzarello and Chiang make a definitive statement about what is most important in the concept of identity. It is a statement that is loud, and, more importantly, one that rings true. It’s something that applies beyond the fantastical scope of Diana’s existence to connect with readers. When considering it in the context of the series, especially alongside characters like Lennox and Hera, it becomes a consistent and powerful theme.

Chiang shares all of Azzarello’s accolades for this conclusion. Although he has not been credited on every issue in the series, his presence has been constant. Wonder Woman has been defined by his unique style and incredible sense of design. Figures like the First Born and Minotaur have never seemed more powerful or monstrous than in these final pages. Every character acting across this apocalyptic version of Mount Olympus displays their intentions and abilities in their appearance. Appearances are so informative that it is possible to read through every action sequence without requiring a single word.

The design elements in this issue are every bit as good, but what is most striking about Chiang’s work here is its emotional resonance. Artwork carries readers through the smaller emotional beats just as well as the big, action-driven ones. There is a callback to Wonder Woman #0 that ensures even this minor detail is easily understood and incredibly potent. It is a highlight of the issue and one that brought a few tears to my eyes. Emotions are as high as the stakes and Chiang ensures they feel that way. When Diana is shown to be furious or deeply afraid, her face bears all the weight of those emotions and demands empathy.

Chiang’s composition of the final page is perfect; it is a truly incredible piece of artwork. It conjures memories of the past while simultaneously pushing both its characters and the reader into the future. It creates a metaphor for the triumph of this series and provides the majesty and power that flow naturally into this one moment. The final page is a testament to both the power of the story that preceded it and Chiang’s mastery of his craft.

Wonder Woman #35 is the end of an era for the character, but it is not one that will soon be forgotten. Over the course of three years, Azzarello and Chiang have reshaped the Amazonian warrior and given her a story that stands side-by-side with the absolute best of superhero comics. They have provided her with a consistent mythos, an endearing supporting cast, and some of the nastiest villains in comics. Wonder Woman is a comic that is good to the very last page and will be remembered for a long time to come.

I can think of no better foundation for this character to grow upon in the 21st Century.

Wonder Woman #35 is a Conclusion Worthy of a God (Review)