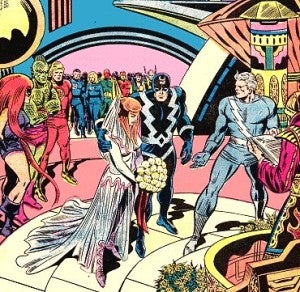 Shortly after Marvel's The Avengers director Joss Whedon told reporters that Quicksilver and the Scarlet Witch would appear in Avengers: Age of Ultron, 20th Century Fox retaliated with an announcement that Evan Peters of Kick-Ass fame had been cast as Quicksilver in X-Men: Days of Future Past.

This may have seemed like a huge conflict at the time, but in reality it was simply two studios marking out their territory; the unique nature of Quicksilver and Scarlet Witch's characters is such that they're at home both with The Avengers and the X-Men...and the rights situation surrounding the characters reflects as much.

But our readers know all of this--or at least many of you do.

Not long ago, a number of Fox execs, out promoting The Wolverine, suggested that when Josh Trank's Fantastic Four reboot comes out in a few years, those characters will be established as sharing a world with the X-Men family of characters. It was the first step toward Fox officially recognizing that, yes, they want to create a Marvel Universe all their own. After all, as Kick-Ass creator and Fox adviser Mark Millar has said so many times before, there are as many characters--and arguably even as many marketable properties and franchises--in the X-Men Universe as there are in the rest of the Marvel Universe combined.

Their connection to much of the Marvel Universe, though, has always been tenuous. Not so much the Fantastic Four, who have always played in the Marvel sandbox, with members like Crystal, She-Hulk--hell, even at one point Wolverine.

But it's Crystal we're interested in, because she's...well, she's all over the place.

Nobody has yet dug into the history of Crystal, but we've got some feelers out. On the one hand, she's more closely associated with the FF than with any other single group in the Marvel Universe except the Inhumans, of which she's one. She's also briefly been an Avengers and, during that time, was married...

Once again, the Maximoff family tree gets complicated for the movies.

It's likely she's owned fully by Marvel as part of the Inhumans deal, but that presupposes that Marvel didn't allow ancillary FF characters to be gobbled up when Fox got the Fantastic Four rights--something we know not to be true, since nobody can use Silver Surfer these days.

As a character with long ties to the X-family and the FF, it's possible her character could end up at Fox, or at least as a jointly-shared property (when Feige was originally asked about the Scarlet Witch/Quicksilver situation, he said that there weren't "very many" other Marvel characters, citing the Skrulls as another example, who have "a little bit of that" shared rights issue. Whether that means the Skrulls were the only other ones to his knowledge or just that they were on his mind since there was a lot of Skrull talk in the build-up to The Avengers isn't yet clear--but you can bet it likely will be soon. 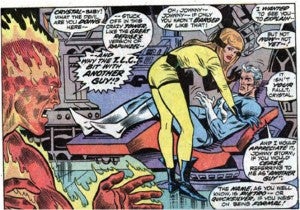 Now, the connection between Quicksilver and Crystal goes even a little deeper; before she married Pietro Maximoff, she dated Johnny Storm for a while. That's Human Torch of the Fantastic Four, to you and me. Whether she can be used in name or not, it seems there's some promise to be had in giving the younger Quicksilver of the X-Men movie universe a romantic rival in the form of Johnny who, let's face it, is always trying to steal other guys' girlfriends (just ask Ben Grimm). So let's just assume for a minute that Crystal is over in the planned Inhumans movie at Marvel and categorically unavailable in Fantastic Four. That doesn't inherently mean that someone playing a similar role to her can't be placed in the film.

What purpose would that serve? Well, it would give them a reason to "cross over" that's more than just the "eff you" sequence in X-Men: First Class and less than a full-blown crossover movie (something nobody wants for the first Fantastic Four movie in the same way a Batman/Superman movie wouldn't have worked if you didn't make Man of Steel first and establish Superman's character).

It's all speculation, of course, and the possibility of it being a literal translation of what you see above from the comics is basically zero--but certainly the urge to use Quicksilver and not Scarlet Witch is an odd one...and perhaps his tendency to move around from team to team (Avengers, X-Factor, West Coast Avengers, X-Men, etc.) and his connections to the Fantastic Four will make some sense of it.

X-Men: Days of Future Past: Why Quicksilver Could Be Important