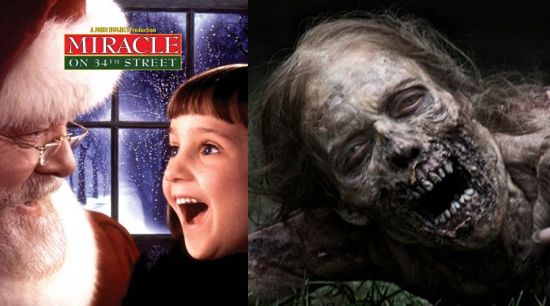 Like many of you, we at Comicbook.com will be going through zombie withdrawals for the next couple of months while The Walking Dead is on hiatus. Last week's "Made to Suffer" episode was the midseason finale and the series will not return until Sunday, February 10, 2013. Not knowing what to do with our Sunday nights now, we decided to take a gander at what was airing on our favorite network AMC. Knowing that Walking Dead fans are suffering, would AMC offer us a little something to tide us over? We were hoping maybe they would fill the spot with a rerun of a past episode of The Walking Dead or possible a classic zombie movie from days gone by. Heck, we would have been satisfied with Chris Hardwick rambling on about the best of the Talking Dead. But instead what AMC has chosen to air in The Walking Dead's time slot is Miracle On 34th Street. Don't get us wrong, we love the Christmas classics just as much as anyone else, but it's an unusual choice to fill The Walking Dead's time slot. Just think of the surprise that anyone who might have missed last week's episode and didn't realize it was the midseason finale might face. They tune in for zombies and get a Christmas miracle.

AMC Replaces The Walking Dead With Miracle On 34th Street