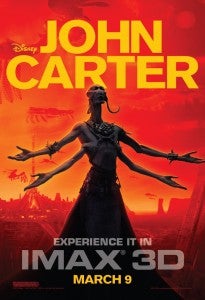 Disney's John Carter opens today, as one of the year's first big-budget blockbusters and a movie that has had some terrific word-of-mouth. Despite mixed reviews, it's widely expected to unseat The Lorax as America's #1 film. We here at Comicbook.com will have a full review coming later today, but in the meantime we wanted to share a handful of reasons why it would be good for you to check the film out this weekend. Andrew Stanton The Academy-award winning director of Finding Nemo and Wall-E, who had a hand in writing most of Pixar's massively-successful animated films of the last fifteen or so years, makes his live-action feature film review with John Carter. In case we had any doubt about his grasp on the fundamentals of storytelling, they were completely set aside when listening to his fascinating TED talk earlier this week. The story is important. Historically speaking, the John Carter stories are some of the most important in the genre. Science fiction and the idea of the space opera were born from Edgar Rice Burroughs' revolutionary series of John Carter novels, without which we wouldn't have films like Star Wars, and comic book storytelling would be dramatically different than it is today. Trust us, you want more of these. As is known with every big tentpole-franchise film, you won't get more of them unless people go see the first one--preferably on opening weekend. But there is a wealth of content in the form of other novels and even comics that could be further adapted based on Burroughs' John Carter stories, and it would be a lot of fun to see how the story could evolve beyond the first film. It's a feast for the eyes. Just like James Cameron's Avatar a few years back, it's a credible argument to say that you should watch John Carter for the visuals alone. The cutting-edge CGI combines with a unique and impressive grasp of the world and characters that Burroughs created to create a visually-captivating film. Josh Kushins' recent book The Art of John Carter: A Visual Journey (which we will have a review of tomorrow) was $50 very well-spent, and now moviegoers can see those images--larger than life and moving--for less than a third of that at their local theater. Dejah Thoris As writer Ron Marz has pointed out a few times lately on Twitter and in articles, Dejah Thoris was one of those iconic characters who gave a generation of young men their first fictional fantasy babe. Lynn Collins is not only gorgeous and bad-ass, but reportedly is one of the best actors in the film, bringing the character to a pitch-perfect life on the screen.