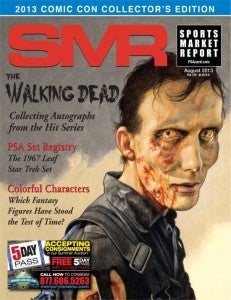 PSA announced today that they will giving away PSA-graded samples of The Walking Dead and Game of Thrones trading cards at Comic-Con International in San Diego from July 17-21, 2013. PSA is the world's largest third-party certification company for trading cards, autographs and memorabilia. In addition to the trading cards, PSA will also be giving away, while supplies last, copies of the August 2013 issue of SMR magazine with a cover story about collecting autographs of The Walking Dead actors. The entire August issue of the magazine is devoted to the popular genre of entertainment collectibles such as Star Trek, The Addams Family and classic movie monsters. Visitors to the PSA booth (#5617) can also enter for the chance to win the zombie-inspired original acrylic-on-canvas artwork created by renowned artist, Arthur K. Miller, for the magazine's cover. Valued at more than $3,000, the custom-framed artwork will be given away to a lucky visitor in a random drawing among those who register at the PSA booth during the show. No purchase is necessary to enter this drawing. PSA/DNA autograph experts will be available at Comic-Con to authenticate autographs on-site. "PSA-certified collectibles often sell for premium prices because of the strength and credibility of the PSA brand," said Joe Orlando, President of PSA and Editor of SMR (Sports Market Report) magazine. "PSA/DNA uses an invisible DNA marker on certified items. It can only be seen using a calibrated laser, and counterfeiters have only a 1 in 33 trillion chance of duplicating that DNA strand," explained Orlando. Since 1991, PSA experts have examined and certified more than 20 million trading cards, autographs and other entertainment and sports memorabilia with an estimated cumulative value of more than $1 billion.