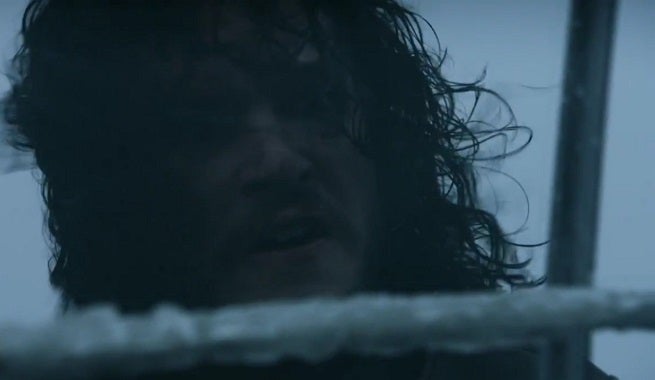 SPOILER WARNING for the Game of Thrones Season 5 Episode 9.

Tonight's episode of Game of Thrones, "Hardhome," ended with an epic battle between a small band of Night's Watch brothers, allied with the Wildlings, against the undead horde of the White Walkers.

Things…didn't go particularly well for Night's Watch and friends, but one interesting bit of information became clear. Jon Snow was able to kill a White Walker, not with dragonglass – previously the only known way of fatally wounding a White Walker – but with Longclaw, the sword given to him by Jeor Mormont.

Longclaw is one of the few known swords in Westeros made of the metal called Valyrian steel. Valyrian steel is an exceptional metal, known for being incredibly sharp and strong, and surprisingly light. The metal keeps its sharp edge with no maintenance, and is recognizable by a rippling pattern in the blades made from it.

So Valyrian steel kills White Walkers. Great, right? Problem is, the secrets to forging Valyrian steel were only known to the Valyrians, and those secrets were lost when the Doom destroyed the freehold. While several of Westeros' great houses had Valyrian steel swords passed down for generations, most have been lost to time.

In addition to Lonclaw, Ned Stark's sword, Ice, was also Valyrian steel. After Robb Stark was killed, Tywin Lannister had the sword melted down into two smaller swords. One was given to Jaime Lannister, who passed it on to Brienne of Tarth. Brienne named the sword Oathkeeper. The other was given to Joffrey Baratheon, who named it Widow's Wail. Upon Joffrey's death, the sword was passed on to his brother, Tommen. House Tarly, the house of Samwell Tarly, has Heartsbane. House Corbray, a house in service to the Vale, has Lady Forlorn. The dagger used by the assassin who tried to kill Bran in Season 1 was also Valyrian steel. It belonged to Petyr Baelish, though he claims he lost it to Tyrion Lannister in a bet before the assassination.

Why Valyrian Steel is capable of killing White Walkers remains a mystery, though it certainly suggests a connection between the metal and dragon glass. Like Valyrian steel, dragon glass is found in great quantities in Valyria. Perhaps the secret to forging Valyrian steel rests in obsidian. Either way, this may be the first step towards the Night's Watch learning how to mount a defense against the Walkers.

Game of Thrones airs Sundays at 9 p.m. on HBO.

Game Of Thrones: What Is Jon Snow's Sword Made Of?