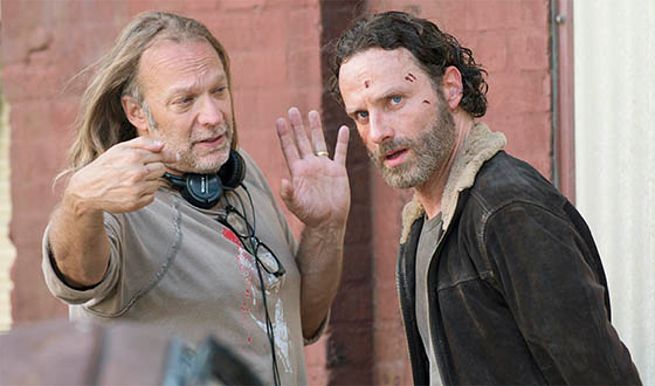 Greg Nicotero may be the Executive Producer and make-up/effects guru behind The Walking Dead, but you better believe he is as passionate about the series as the biggest of its fans.

On Friday, fresh off of the set of The Walking Dead and just out of costume (because he declared every member of the crew must dress up for Halloween), Nicotero took a few minutes to talk with ComicBook.com about The Walking Dead's momentous sixth season.

CB: So, this has been a huge season to say the least.

GN: Yeah, it's by far my favorite season. I'm just really loving the story line. When Scott Gimple initially pitched the season to the executive producers back in February, he was like, "You know, a lot of people talk about the show, a lot of people talk about the fact that it's not just a zombie show, it's got so much more." He said, "For a lot of the next season it is going to be about the walkers and the walkers are really gonna be driving our story. So, from the first episode when we opened the flood gates, virtually everything that happens is in some way shape or form to this world and the walkers and has a very direct influence in it.

On last week's episode, a character fans have been falling in love with enraged the internet. Before the camera showed anything, it looked like Nicholas shot himself in the head. Is he still alive?

Is Nicholas still alive?! Well, you know, we definitely saw some blood spatter on Glenn, so in terms of if somebody would be able to potentially survive that gun shot, I don't know.

Scott said to me when I was shooting the first episode, he said, "Our goal this year is we want to break people's televisions. We want to put things in front of them that are so mindblowing that they're TV's will just vaporize. I feel like that was basically our marching orders going into this season and every episode has a "What the f---?" moment and those moments will continue.

With episode four, it's probably one of our best written episodes of the season, and right in the middle of it, Scott is smart enough to understand that you need to give the audience a moment to catch their breath. I think we've been teasing Morgan's backstory for a couple seasons now, so, yeah it's pretty relentless this season

Yeah, I think it was a good spot to drop this episode in and give everyone a minute to comprehend the whole Glenn thing but leave that cloud of mystery a bit longer.

Even though people are gonna be furious, I think, when there is no resolution to last Sunday's events.

Now, on a more serious note about that scene at the dumpster, assuming Glenn somehow survives and makes it out, he's getting really good at dodging brushes with death. Is there any chance he can dodge Negan's bat?

That's not even a question I would begin to start to answer. The truth of the matter is a lot of our characters have those brushes with death and some of them make it through and some of them don't. We had something as shocking as Emily Kinney's death last year and then in season three we had that moment where we thought Carol was dead and then she returned a couple episodes later. What's really critical for our show is that we're taking the audience on the best ride that we can. It's not always fun and it's not always cheerful but it's our show. I'm a big fan of Game of Thrones, I love that show. I sat up numerous times and yelled at my television when something happens on Game of Thrones because I never read the books. As far as I'm concerned, it's part of the experience and it's part of why you watch the show. It's because we're able to elicit these emotions from viewers. It happens any time there's a character death.

You've been known for including some homages to past zombies and horror films with some walkers on The Walking Dead. Have we seen any or maybe missed any so far this season, aside from your epic cameo, of course? Or are there any coming up you're looking forward to?

There is a couple in the back half. You know what's ironic, I had an awesome walker cameo that we put in a scene in episode six but in the editing process the scene was removed so the tribute walker got cut out. I'm still gonna do it at some point but I feel like after the fact, I missed a great opportunity. Because of the black and white in 6x01, I would've had a perfect opportunity to do a Night of the Living Dead homage and actually shoot a zombie in black and white and make it look like a scene from Night of the Living Dead. I kind of missed the boat a little bit there because I hadn't anticipated that opportunity was gonna be there but there's some great tribute walkers coming up for sure. There could be a little Tarman Return of the Living Dead, there could be another Dawn of the Dead... I put them in because I love doing them for us. You do thousands of make-ups and to have an opportunity to recreate a make-up or a character that you just loved, that inspired you, it's sort of my nerd-version of paying back.

The first three episodes of season six may have featured more walkers than the entirety of the preceding seasons combined.

Yeah, I know that the first episode, we had nearly 1,000 people in make-up.

How many hours does that take?

We sort of refined our process a little bit this season. I was in Los Angeles and was driving to meet with Scott Gimple and kind of had this revelation, "Wow, we should just set up those spray tan tents that they use on Dancing With The Stars but just use zombie color and set up an assembly line so we can get more coverage of our extras." I think the biggest day that we've had to date was 300 walkers and in the episode we shot for last week and there was a lot of days where we had a lot of zombies. That whole sequence with Glenn and Nicholas being driven to the alley way, we did one shot where we put 100 walkers in one street and then you pan to the middle road and we just took that group of 100 and re-purposed them two other times by just shifting the crowd around. So, when you're panning from the street on the left to the middle road to the right road, it looks like there's three or four hundred zombies filling the streets, and that was all done practically by just hiding a cut in the pan.

Should we expect to see this many zombies for the rest of the season or are we going to shift back into the focus on living humans and the humanity aspect of the show?

I think it's pretty safe to say that we have not seen the last of the herd. Again, I still think, as illustrated in episode four, we still have some great dramatic story to tell. I think Morgan's backstory is a very, very powerful one. That was probably the moment where we were able to take a little bit of breather, you know? From the 8,000 zombie make-ups per day.

I think when we did season one, we didn't really know what we had gotten ourselves into. When we did the second episode where Glenn and Rick are walking down the streets covered in zombie guts, I think we slept like five hours a night because we'd get home at 10 o'clock at night and then we'd have to turn around and leave at 5 o'clock in the morning to go and work. It felt very much like that. It was a relentless pace where we were the first ones in and then the last ones out at the end of the day after having put so many people through zombie make-up. There was times where there was make-up artists who never even left the make-up trailer. They just kept churning out make-up after make-up.

When I spoke to Andrew Lincoln a few weeks ago, he told me that he campaigned to lose the hand. Now, Rick has cut his hand and it seems like it might be an issue. If it was up to you, is that something you would do? Have Rick lose a hand?

You know, it's so funny... The whole Rick losing his hand conversation, [Andrew Lincoln] has told me a thousand times, "Listen, let's just chop it off. I don't know why he has a hand. I think it would be great." I don't think there was ever a time where we didn't do it because we didn't think it wouldn't be great for his character but unlike Hershel's leg where we were able to shoot long dialogue scenes between Hershel and Glenn and we didn't have to worry about the visual effects of digitally removing his foot in every shot. With Merle, I designed this cool arm specifically to hide his stump. What we ended up doing was we did one shot where he took it off and showed the stump to Andrea and then he slid it back on. I think it would be very challenging indeed to try to deal with removing Rick's hand from a technical standpoint.

The scene in the comics where Carl loses an eye is approaching. I'm interested to see if you guys go forward with that.

Yeah, me too, actually!

Norman Reedus just got his new show, Ride with Norman Reedus, does that mean we should be worried about Daryl?

No! That show is something he shot a promo for before we even started shooting. I saw that that was announced and he's like "Oh, man! Now everyone's gonna think that you guys don't want me on the show anymore!" No. It's completely different. We have lots of our actors that go off and do different things in between. He did a movie last year that Robert Kirkman and Dave Alpert produced. That didn't mean he wasn't coming back, a lot of people just assume that.