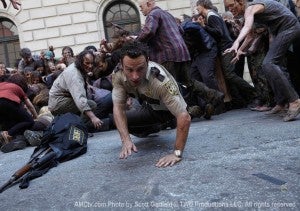 's showrunners had said a while back that a new character named Harold, one who never existed in the comics, would be joining the cast of the AMC zombie smash starting with the show's third season, essentially stepping into the Dale-sized hole left in the cast. More recently, a casting notice seemed to out another new character being created for the show, a middle-aged, Hispanic man named Manuel. Now, TV Line's Michael Ausiellois saying that Manuel might be serving a comic relief purpose for the show. Says Ausiello, "AMC's monster hit will be adding to its canvas a recurring character named Manuel, who I'm told is strong, smart, kinda blue-collar and potentially the comic relief that the show has never really had." A dark, sardonic kind of comedy has been seen from a number of characters in the show, including the departed Dale and Shane, but the bulk of that work had been carried by Daryl Dixon, who might well find himself somewhat distracted by the return of his brother at some point in the season. But out-and-out comic relief seems like a strange role to play in the world of The Walking Dead. It's possible that Ausiello is generalizing, though; the casting notice (courtesy the Daily Dead) seems much more in-line with the feel of the show as fans already know it:

"[MANUEL] 30 to 40, Hispanic, a working class survivor, he is confident, physically skilled, a leader when necessary, capable and smart. Has a terrific sense of humor where you wouldn't expect one. Recurring."

Whether Manuel will be an inmate at the prison where the survivors find themselves is unclear; according to the story at the Daily Dead, Harold has already been revealed as one. The Walking Dead begins filming later this month and will be back on AMC in October.