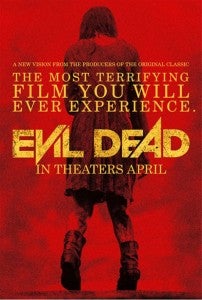 During The Walking Dead Season Three Finale, be sure to keep your eyes open for an exclusive TV spot for the Evil Dead movie. In the Evil Dead, five friends head to a remote cabin, where the discovery of a Book of the Dead leads them to unwittingly summon up demons living in the nearby woods. The evil presence possesses them until only one is left to fight for survival. Here's an advanced preview of the Evil Dead TV spot. The preview is introduced by original Evil Dead star Bruce Campbell and new Evil Dead director Fede Alvarez. The Evil Dead is scheduled to be released in movie theaters in the United States on April 5, 2013.