With Tyreese, Carol, Lizzie and Mika featured as the focus of tonight's episode of AMC's The Walking Dead (titled "The Grove" and airing at 9 p.m. EST), we decided to revisit one of our most popular theories from earlier in the week: that Lizzie and Mika are the TV version of Ben and Billy. That's the popular theory, and with the clock ticking down on Season Four and rumors swirling around a death this episode, it seems like as good a time as any to check in and see how the pairs compare. First, some background. 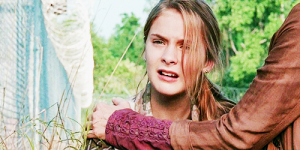 Lizzie and Mika first appeared in the Season Four premiere, titled "30 Days Without an Accident," in which Lizzie showed herself to be a bit odd. She "befriended" a walker -- and not a seemingly-harmless walker like Ed at the end of Shaun of the Dead or the one in Fido. This was just one of the clutching, snarling walkers outside the prison gate, which happened to have a name tag so that she could identify it. When Carl explained to her that walkers are dangerous, not toys or friends or whatever she seemed to think this one was, she became very upset with him. She'd seen her mother turn, and thought that humans were just as dangerous as walkers were, so she didn't really discriminate. When Carol tried to chastise Carl for being unkind to Lizzie, telling him that she's weak, Mika corrected Carol, saying that Lizzie isn't weak but "messed up." Not long after that, their father Ryan is bitten and has to be put out of his misery, passing the children to Carol, who takes care of them as her own until her exile -- and then apparently tracks them and rejoins them (now joined by Tyreese and baby Judith, who had been abandoned by Lizzie and Mika during the siege and is presumed dead by the rest of the survivors after Rick and Carl found her car seat, smeared with blood from where Tyreese removed her to run more easily). During their last TV appearance, Lizzie apparently killed some bunnies hiding in the hollow of a log where she was sitting and left the bodies behind when they started moving again. Because she didn't take the bunnies for food, there are a few possibilities as to why she might have done this:

During the group's time at the prison, someone had been feeding rats to the walkers at the gates. While many fans thought it was an agent of The Governor, helping to put a strain on the defenses of the prison. Others speculated all along that it might be Lizzie...and while the initial thought that "she was nice to that one walker that one time" may have felt a little thin, most agreed that the thing with the bunnies (coupled with the lack of any apparent organization or planning on The Governor's part when he finally appeared onscreen this season) pointed to Lizzie pretty decisively. Meanwhile, Tyreese had found more dead animals in the Tombs (the area beneath the prison) and had developed his own theory that whoever was doing that, had also killed his girlfriend Karen and another survivor, David. Both were killed after falling ill with the same flu that ran through the prison early in the season. Ultimately Carol had admitted to Rick that she committed those murders, resulting in her exile from the group, but Tyreese doesn't know that yet...and some fans even believe that Lizzie is the one who did the deed, and that Carol only helped her cover it up after she discovered the truth. That's ultimately what led us to the theory that Lizzie and Mika might be the TV series equivalent of Billy and Ben. Who are they? Ben and Billy are twin brothers, sons of Allen and Donna and characters first encountered in Image Comics's The Walking Dead #2. The pair lasted nearly 60 issues -- no mean feat in the world of the zombie apocalypse -- and were adopted by Dale and Andrea after their father's death. Their mother was killed and devoured during the walker attack on the survivors' camp, and Ben remained emotionally walled-off after that. Shortly after the group settled in at the prison, their father was bitten and killed by walkers and the kids were adopted. It's at that point, with Dale and Andrea now part of the "family," that the twins became a major part of the narrative. Kids are rarely a big part of The Walking Dead's "A plot," but kids in the care of characters as central as Dale and Andrea would be conspicuous by their absence. It's worth noting at this point that while Ben was often seen being cruel to other children and it was strongly implied that he had tortured and killed a cat, all of the kids in the comics skew younger than the ones on TV and as a result, the five-year-old Billy and Ben were never considered serious threats to the adult members of the group. Readers certainly knew that there was something up with the twins, but it wasn't clear to what extent. In fact, when I spoke with series creator Robert Kirkman about The Walking Dead #60 on the week of its release, here's how the discussion went on the matter:

Are the twins torturing/killing that barn cat, or just playing with a corpse? I ask to clarify, as it seems like the two are both disturbing, but one FAR more than the other. Kirkman: One definitely killed that cat, Ben…and the other, Billy, is finding him in the act. More on that next issue. 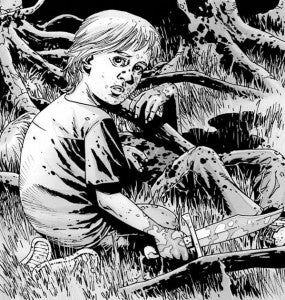 So...it isn't as though I felt at the time it was the most important part of the issue. As you can see at left, though, it turns out I was wrong about that one. In The Walking Dead #61, Ben brutally kills his twin brother and then, caught in the act again (this time by Andrea), tells her "Don't worry, he's going to come back. I didn't hurt his brains." After locking him away, the group debates on killing Ben to protect themselves. With Dale taking a strong no for obvious reasons, it feels a bit like a scene they later did in the second season of The Walking Dead when the group had captured Randall and was debating what to do about him. The adults take no immediate action but that night, Carl sneaks into the van where Ben is locked up and shoots him. Carl, of course, isn't anywhere near Lizzie and Mika. Because of both proximity and dramatic value, I and many others have speculated that if Lizzie were to kill Mika, it would have to be Carol who puts her down. So, ultimately, how close? Well, they aren't boys and they aren't twins -- but in a number of other ways their  stories sync up disturbingly well. Even the different adoptive parents can be explained simply (in the comic book series, Carol was dead by this point in the story, while Andrea and Dale were still alive. On TV, it's flipped). What might be worth watching out for is that Judith is still with Carol and Tyreese's group...and we've seen Tyreese hand the baby off to Lizzie in previews for the episode. The reports of "a death" in this episode call into question whether any of this is relevant tonight (as The Walking Dead #61 saw both twins die in rapid succession), but if it was, it would seem like a missed opportunity to discuss how things went down in the comics with a little more depth.

The Walking Dead: Lizzie And Mika Compared To Ben And Billy