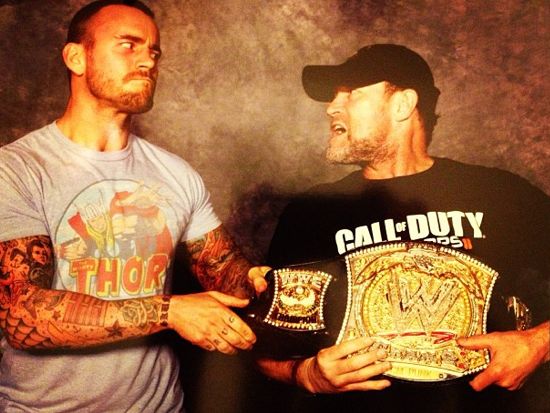 It's official. Merle Dixon is in possession of the WWE title belt, and possession is nine tenths of the law. After CM Punk offered Michael Rooker, who plays Merle on The Walking Dead, a title shot as part of an interview on Talking Dead, Comicbook.com has been pushing for the two to actually get in the ring together. While an officially sanctioned WWE bout has yet to actually happen, CM Punk and Michael Rooker did meet up in New Orleans, where they are both appearing at the Wizard World Comic Con. During a photo opportunity, the two entertained fans and posed for photos together. Including the photo above, which Michael Rooker posted on Twitter earlier today, which shows Rooker in possession of the WWE title belt. Of course, it looks like CM Punk still has a light grip on the belt, so he must not be completely ready to give it up yet. Rooker tweeted, "CMPunk Does not like the fact that I think his belt would look better on me than him." So what do you think? Does our old pal Merle look pretty good in a WWE title belt? We're hoping that Chris Hardwick shows this photo on the Talking Dead tonight. In the meantime, the Wizard World Comic Con continues in New Orleans today, including a Walking Dead panel featuring Michael Rooker, Norman Reedus, and Jon Bernthal.