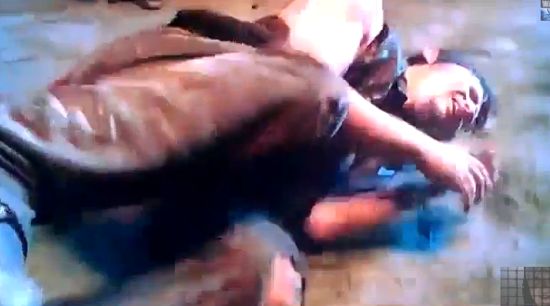 A new international promo for The Walking Dead has been posted to YouTube, which shows some brand new footage for "The Suicide King" episode. Be warned that spoilers follow. The promo starts off with Rick, Michonne, and Carl traveling by car to a town that appears to be destroyed. Rick can be heard saying something about "It's all gone." While its been a big mystery over whether Merle and Daryl will actually follow The Governor's order to fight to the death, this new promo reveals that Merle doesn't seem to have a problem with it. While Daryl just stands there, Merle punches Daryl across the face, knocking him to the ground. However, the biggest spoilers from the new promo involve Andrea. It appears that The Governor tells Andrea that if she goes to the prison that she should stay there. It also looks like Andrea might be having second thoughts about The Governor, because she's shown hovering over him with a knife in her hand while he's sleeping. The Walking Dead returns with new episode on Sunday, February 10, 2013 on AMC.

The Walking Dead New Footage Of Merle And Daryl Fighting