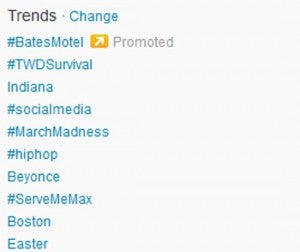 Earlier today, AMC and Terminal Reality teamed up to offer fans a chance to chat via Twitter with Norman Reedus, who plays Daryl Dixon, about the upcoming The Walking Dead: Survival Instinct video game. Fans were instructed to tweet their questions to Norman Reedus using the hashtag #TWDSURVIVAL. Many fans also tweeted directly at Norman Reedus' twitter handle @wwwbigbaldhead. So what happened? Well, Norman Reedus fans overwhelmed Twitter, driving the hashtag #TWDSURVIVAL to the top of the trending list on Twitter. In fact, Norman Reedus was receiving so many tweets a second that his computer became this swirling flurry of tweets. After answering several questions, Reedus tweeted, "These tweets are coming in at lightspeed . I'm trying to answer all of them. This screen looks like the matrix." Norman Reedus tweeted a couple videos showing what was happening. The tweeted questions were coming in so fast on his screen that it would be impossible to read all of them, much less answer them all. We've shared the videos below because we thought it was interesting to see what it looks like for a celebrity during a Twitter Q&A.