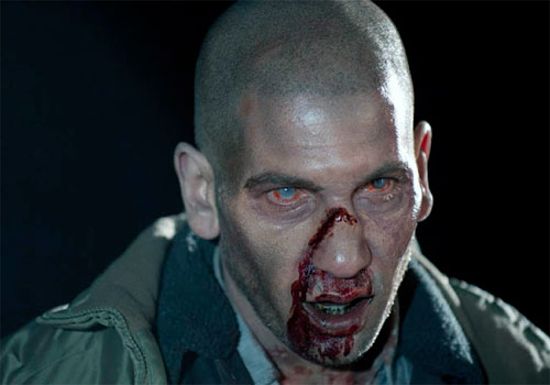 In the "Better Angels" episode during The Walking Dead Season 2, Shane pulled a gun on Rick, and Rick wound up stabbing his old friend in the chest to kill him. Then, Shane reanimated as a zombie, and Carl wound up shooting zombie Shane. At last weekend's Wizard World St. Louis Comic Con, The Walking Dead's Jon Bernthal shared a slightly different ending that he had wanted to see for his character. "The way that I wanted it to go down was that Rick was going to take his gun out, and he was going to throw it away and say, 'I can't kill you, brother. What do you want from me?'  And that would enrage Shane, and he would push him even further, saying worse and worse and worse stuff to him," said Bernthal. Bernthal continued, "The point being that basically what I wanted to have happen was that I would rush him and force him to stab me. And then he would stab me, and I would fall on the ground. And when I reanimated, I would get up as a zombie. And since Rick threw his gun, when I'm approaching him as a zombie, he would pick up my gun, which was on the floor. And he would point it at me to shoot me. And he would just go click, click, and click. And my gun was empty. And then, Carl would have shot me. So Shane took Rick out there to make Rick shoot him to make him be man enough to raise his child. And to sort of infect his head and his psyche forever to put that on him. It's the most selfish and selfless thing to do there."