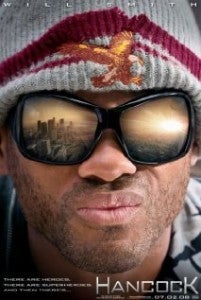 Despite what it says on his IMDb page, The Walking Dead executive producer Glen Mazzara is not writing a script for the planned Will Smith superhero sequel Hancock 2. The producer, who has written a number of TV episodes for series like Nash Bridges, The Shield and Criminal Minds: Suspect Behavior, seemed poised to make the jump to writing his first feature film, but according to Mazzara, his involvement with the project ended long ago. "No. I worked on an outline 2 years ago," Mazzara told a fan when asked about whether he was still writing the movie, which was announced shortly after the first Hancock but hasn't yet nailed down a final screenplay, a cast or a release date. Peter Berg, who directed the first Hancock as well as movies like Friday Night Lights and Battleship, is still reported to be attached to the sequel. A lack of any progress on the film hasn't stopped Berg and star Will Smith from talking about the movie plenty, always asserting that it's still on track to happen.

The Walking Dead's Mazzara is Not Writing Hancock 2