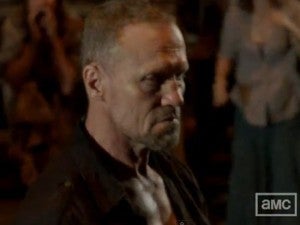 There's been quite a bit of speculation over the title of the midseason premiere of The Walking Dead, "Suicide King," which returns next month. Is it, many ask, a literal title? Who might be the Suicide King? If it is literal, which seems less likely now than it did when the episode title was announced, there are a few ways it could be applicable. If someone did sacrifice themselves to give Merle and Daryl Dixon an opportunity to escape, the obvious choice would be Andrea, who's seen in the preview as none-too-happy that her friend (and his brother) are in trouble. The likelihood of her dying in the midseason premiere, though, is next to zero and anyway who would call her "King"? What about Milton? He's a candidate, certainly. Milton doesn't really seem entirely at home in Woodbury and he's definitely not comfortable with the degrees to which the Governor is willing to go and the ways he's willing to sacrifice humanity. He doesn't seem like much of a moral champion, though, and it's hard to picture him standing up to the Governor, even for the few minutes it would take the Dixons to escape. Plus, it's not like he loves Merle or anything. Our original theory, when we heard the title, was that it could be a reference to Merle. One of the most popular theories about Merle (and one that people are still clinging to) is that he'll eventually sacrifice himself for his little brother. Merle, after all, doesn't really fit in with Rick's group of survivors and is unlikely to be a long-term member of the group. He can't kowtow to Rick in the way that's necessary to join the prison-dwellers, for a start, and he's frankly not all that sympathetic a character. After all, if you take away the Michael Rooker charm, eventually you have to address the fact that you've got a guy hanging around your group who's openly a white supremacist, misogynist and general, all-purpose bastard. But if Merle were to sacrifice himself for Daryl anytime soon, it's clearly not AT Woodbury, which would be the most logical way of going about it in this episode and in the context we're given for "The Suicide King." There's pretty clearly a moment in the teaser for the midseason premiere in which Rick and Merle are seen heading into the woods to join the rest of Rick's merry band of survivors. It's a puzzling title. Do our readers have any clues? One thing that's kind of a fun bit of trivia: There was, back in 1997, a film called Suicide Kings. That movie starred, among others, Sean Patrick Flannery of The Boondock Saints fame. In The Boondock Saints Flannery, of course, was the violent, maladjusted brother to Norman Reedus's character--someone from whom Reedus's character was inseparable. Sound famliar?

The Walking Dead's Merle Dixon and the Suicide Kings