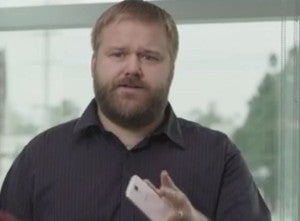 The Walking Dead creator Robert Kirkman once professed to being obsessed with Star Wars. So it probably shouldn't come as a big surprise that he's trying his hand at acting in a new Star Wars parody video. In a Nerdist You Tube video called "Revenge of the Kirkman: Star Wars Course Of The Force Episode 6," Chris Hardwick heads to the final showdown with Robert Kirkman and bumps into Freddie Wong (FREDDIEW) along the way. In the video, Robert Kirkman brags, "The Walking Dead is like the biggest show on TV. It gets higher ratings than anything on NBC." When Chris Hardwick interrupts, Kirkman barks, "Quiet! I don't think you understand the magnitude of this. If you factor in inflation, The Walking Dead has more people watching it then Seinfeld, Friends, or The Cosby Show combined."