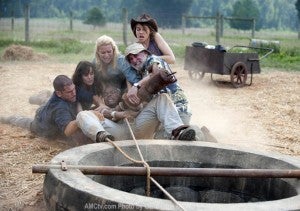 Did anyone think that, four episodes into the season, neither Carl's nor Sophia's series premiere dilemmas would be resolved yet? Well, that was the starting point for this week's episode, "Cherokee Rose," with Daryl still searching for Sophia and Carl's parents still at his bedside. Adding yet another desperate element to a world that's already pretty volatile and miserable has given the show's second season gravity, but one has to wonder how long that's sustainable before it just seems like Lori was right last week and The Walking Dead is simply not a world fit for raising your kids in. One thing that apparently can no longer be contained, though, is the destiny of certain characters. While still navigating A plots that have little or nothing to do with the comics, this episode saw three major, ongoing characters from The Walking Dead comic books moving toward the roles that readers have long expected of them, and that was pretty gratifying, all things considered. As always, remember that these recaps are intended for viewers who have already seen the episode, or for whom spoilers are a non-issue. SPOILERS ON, and there's at least one really big one this week. The episode opens with the caravan coming back from the roadside where they've been waiting for Sophia. The looks of apprehension and surprise on the faces of the survivors are cut away from pretty quickly, though, bringing us back to Carl's bedside, where Herschel says that his temperature has gone down and Carl wakes up, immediately asking about his missing friend before slipping back into unconsciousness. If creator Robert Kirkman is to be believed in the various interviews he did during Halloween week, the fact that Shane hasn't yet taken a bullet to the brain is going to forever alter the destiny of some characters. That, of course, started last week when Otis was taken by roamers after Shane shot him in the leg, took his gun and the medical supplies he was carrying for Carl and left him behind as bait. If any more of the upcoming changes are as dramatic as that, it's likely this episode's funeral for Otis will be a scene that's looked back on and discussed by fans for some time to come, with Shane delivering an emotional--and mostly false--account of Otis's last minutes for the benefit of Otis's wife and a handful of others gathered at a memorial ceremony. As an aside, I've seen some speculation online that this is a "no body, no crime" situation and that Otis may reappear to put lie to Shane's version of events. While anything is of course possible, that always seemed very unlikely. There may not have been a body, per se, but certainly it's hard to imagine an injured, out-of-shape Otis finding a way to fight through the dozens of zombies who swarmed his semiconscious body as Shane made his escape. In the comics, Otis died off-panel and reappeared later as a severely degraded zombie who Rick put out of his misery (a bit like Hannah, the "Bicycle Girl" from the pilot whose life was revealed in this fall's web series, actually). During the course of Shane's speech, all doubt is removed as he flashes back to seeing the flesh torn from Otis's body. This may, of course, be Shane's guilt-fueled delusions but paired with what we saw last week it seems that Otis's chapter is closed with his funeral. Provided a county survey map by the Greenes, Rick and Shane (neither of whom are quite combat-ready yet after the events of last week) decide to start an organized search for Sophia tomorrow, sending Daryl out to scour the creek bed and the woods around the Interstate until then. Shane, whose ankle was injured running from the same walkers who took Otis, wants to drive to the Interstate to watch, wait for Sophia and make himself useful but not before the rest of the survivors start some firearm training. Herschel asks that no guns be carried on his property and Rick negotiates that their group will secure their weapons and stop carrying them on the farm and its land provided that Herschel allows Dale to stand lookout with a sniper rifle. This leads to a lot of little, but important, moments: 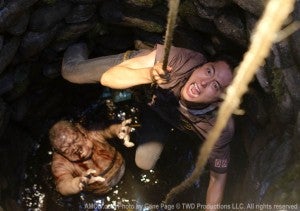 All of this leads to the next "full" scene, and the episode's centerpiece: Dale and T-Dog stand around the water pump, talking about the heart-to-heart they had last episode while the latter was hallucinating from his blood infection. Dale agrees to keep the information to himself before becoming distracted by a sound inside the well they're pumping water from. Slapping a ladel from T-Dog's hand before his friend can take a drink, Dale brings the rest of the survivors to se a bloated, naked zombie at the bottom of the well. They conclude that the creature has to be removed from the water alive, to preserve the hope that it hasn't yet contaminated the water (if they kill it IN the water, their reasoning goes, it will almost certainly do so with its blood). After an abortive attempt at using a canned ham as bait, the decision is quickly made to send Glenn down the well instead, and he (after nearly being killed in the doing of it) manages to get a lasso around the zombie. Moments later, the repulsive creature is out of the well--or, half of it is as its soaked and weakened body bursts when it catches against the lip at the top of the well. The other half falls back in, gallons of blood trailing behind. Well, they agree, it's time to seal off this particular well (luckily, it was earlier established that there are five and that this is not the one from which the house draws its water. Elsewhere, Daryl takes his Great Outdoorsman act to an abandoned house where, perhaps surprisingly, the bumps and creaks in the old building turn out to be nothing at all but a makeshift bed and some recently-eaten food seem to reveal that this is where Sophia is calling home. While Carol, Andrea and Shane are looking fruitlessly near the Interstate, Daryl begins inspecting the grounds around the empty house. One interlude between Shane and Andrea puts their strange relationship on display while communicating that Shane is having some trouble adjusting to what he did last episode. 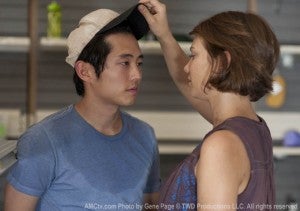 At the drugstore, there are a couple of rapid-fire revelations, neither of which will come as a great surprise to the longtime comics reader. The item that Lori sent Glenn to look for was a pregnancy test, which he finds but, upon being discovered by Maggie, covers clumsily. The ensuing conversation leads to the pair agreeing to, and then having, sex inside the abandoned drugstore. Back at the farm, Rick asks Herschel to reconsider allowing them to remain on the farm. After a protracted discussion, an agreement is struck that if the survivors adhere to Herschel's rules while on his land, he will--no promises--consider allowing them to stay rather than turning them back out into the world. Rick returns to Carl's bedside. Maggie, returning home with Glenn, tells him that their tryst was "a one-time thing," to Glenn's disappointment. Glenn delivers the pregnancy test to Lori and sulks off. Back at the RV, Daryl brings Carol a flower (the titular Cherokee rose) from outside of the house where he believes he'll find Sophia. He doesn't tell Carol about the things he found, but instead shares an old Native American myth about the Cherokee rose which comforts her. Back at Carl's side, Rick tries to come clean to Carl for having misled him, suggesting that Sophia was fine when Carl had woken up earlier. Carl tells him that Lori had already told him and that it's OK, and the pair commiserate about having been shot. Rick gives Carl his sheriff's hat, excepting the badge that was on it, and then back in his own room he removes the one from his shirt as well and shuts them away in a drawer. Out in a field behind the house, Lori hides herself away from the other survivors to take a pregnancy test, which turns out positive. Her fear and desperation brings the big question to the fore: Will AMC's The Walking Dead dare to tread where Image Comics's did not and address this baby's paternity? With Shane still alive, it certainly seems like it might have to happen.