There were no shortage of awesome moments at Star Wars Celebration in Orlando this year. The event might be taking some time off next year, but this year was packed with announcements, panels, reveals, and some hilarious happenings that are sure to keep us talking for some time.

With so many awesome people throughout the franchise's history all under one roof for four days, it was kind of hard to keep track of every awesome thing that happened over the weekend.

Though some might seem more obvious than others (hello, Star Wars: The Last Jedi), there were also some low-key instances that surprised a lot of people. And there were some moments we weren't prepared for, no matter how much we told ourselves we were.

We've put together this retrospective list to of our favorite moments from Star Wars Celebration.

Some of your favorites might not have made the list such as the awesome recreation of the Darth Vader scene from Rogue One: A Star Wars Story, or Hayden Christensen posing with a fan cosplaying as a lightsaber and signing a jar of sand.

Those are all pretty great, but these are the Star Wars Celebration announcements that really got us excited. 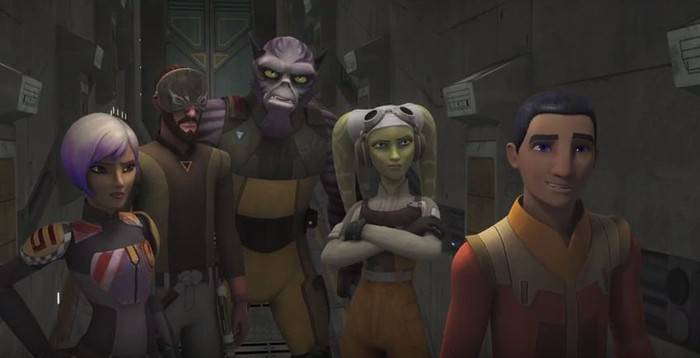 So Dave Filoni might have disappointed everyone when he announced that Star Wars Rebels would be wrapping up after its fourth season.

We've watched Sabine, Kanan, Hera, and the others grow as a family and team, taking the fledgling Rebellion to new heights in their battle against the empire. The time between Revenge of the Sith and A New Hope was ripe for exploration, and we've got to see different sides of the galaxy as the Empire sunk its claws in and harnessed control. Who wants to see that end?!

Luckily, Filoni didn't disappoint us for too long, promising a new animated series to follow Rebels' final season—as well as a surprise premiere of the new season!

The episode featured Sabine and her Mandalorian allies in an Indiana Jones-esque plot which ended on a sour note, promising major fallout for the second part of the two-part event. We can't wait to see where it goes, and were totally surprised that they've already finished that much of the new season.

Sure, we might have hated seeing Lucas ramble on and on about how great he is when he was talking with Leonard Maltin at the beginning of those old VHS rereleases—this was the time before DVD, Special Features, and the 'Skip' button, so give us a break.

But when Lucas came out to speak about the 40th anniversary of the original Star Wars film, it was amazing!

An amazing surprise for the fans in attendance, Lucas discussed many historic moments throughout the franchise, funny anecdotes, and surprising behind the scenes facts with stars such as Mark Hamill, Hayden Christensen, Billy Dee Williams, and Harrison Ford.

Lucas is responsible for creating one of the greatest franchises—which in turn created an amazing fandom—in history, and to see him commemorating a milestone anniversary with his most notable colleagues made for one of the greatest moments of the entire event.

While we knew it was coming, the reveal and trailer for the second entry in EA's reboot of the Star Wars Battlefront franchise blew everyone away.

After the first one seemed to be rushed out the door just to get a concept in the hands of gamers before Star Wars: The Force Awakens hit theaters, it appears that DICE has been hard at work ever since.

Now we're getting a full fledged campaign as well as fleshed out modes that were patched in to the first entry months after release. Better space battles, more playable hero characters, and a story mode chronicling the history of the Empire's Inferno Squad are all coming along in Battlefront II.

We'll get to play as Rey and Kylo Ren, among other hero characters, in the robust multiplayer campaign—and most gamers know that DICE makes wonderful multiplayer games.

Hopefully the new additions keep this game in rotation a long time after its release date.

Well, Rian Johnson and the cast did not disappoint.

Though we didn't get to see Poe Dameron's Oscar Isaac or Kylo Ren's Adam Driver at the panel for the Last Jedi, everyone else who showed up made the event worth while.

Johnson is one of the most exciting young directors working in Hollywood now—hearing Mark Hamill gush over Brick, Brothers Bloom, and Looper was a nice treat—and after the writer/director was announced to be helming the eighth Saga film, our anticipation shot through the roof.

And then we finally got a good look at the continued adventures of Rey, Poe, Finn, and BB-8 in their struggle agains the First Order and, holy crap, it is amazing.

It seemed like everyone was in for a let down when Johnson revealed a new poster. But then he built on those expectations by unveiling the first teaser and all of its implications.

We're excited to see where the Saga goes in Johnson's new film.

This was the most heart-wrenching part of the entire Celebration. After that amazing tribute from Lucasfilm to the late Carrie Fisher, there wasn't a dry eye in the house.

Hamill used his own time to share some of his fondest memories of his on-screen sister, including many jokes and a few NSFW stories.

The actor was surprisingly candid about Fisher, and he knew that's exactly what she wanted from a panel celebrating her life and time as an actor on this earth. But while he shared some stories that intimated some rough patches and slight annoyance with her, Hamill never looked back at those memories with anything other than love and respect.

Fisher was and remains every fan's favorite princess and her legend was cemented even before her untimely passing. While we were lucky to hear Hamill's amazing stories about this wonderful icon, it's a damn shame that she had to pass before we could hear all of these embarrassing stories. Fisher would probably love all of it even more than we did.

Star Wars: The Book of Boba Fett Director Says What We Saw in The Mandalorian Was "Nothing" Compared to Spinoff