Star Wars: The Last Jedi tells a very thought-provoking and emotional story about identity, sacrifice, and the uncertain outcome of the choices we make. Director Rian Johnson manages to embed that heavy thematic framework within a gripping and adventurous Star Wars movie blockbuster, and pulls it together into an exciting finale that is sure to have many fans on the edge of their seats.

That said, there's quite a bit revealed in the last half-hour or so of The Last Jedi, and some viewers may have trouble figuring it all out. As always we're here to help, so here is Star Wars: The Last Jedi's ending explained in full:

The Resistance faces its end after Leia and her surviving rebels are chased into an old Rebel base on the salt-covered planet of Crait. Just as the First Order is about to deliver the killing blow, they are saved from destruction by the arrival of Luke Skywalker, the last Jedi in the Galaxy.

Luke draws out Kylo Ren for a duel, but it is just a ploy; Luke isn't really there, he's just projecting his ("Force Aura?" "Shadow Clone?") onto the battlefield, from his reclusive island on Ach-To. Once Luke has stalled long enough for Leia and the others to escape, he drops the ruse, leaving Kylo Ren drowning in his own anger and frustration.

After that grand display of power, Luke is left seriously drained and weak; he sees the sun setting on Ach-To, and realizes that this is his last day on the mortal plane. Like great Jedi before him, Luke is joined with the Force, leaving behind his empty robes. It's not a sad moment though, as Luke tells Kylo Ren that he's at peace with the end of his story, knowing that he will not be the last of the Jedi, after all. Just as Luke is coming to the end of his Force powers (at least as a mortal), Rey is just beginning to come into the use of hers... 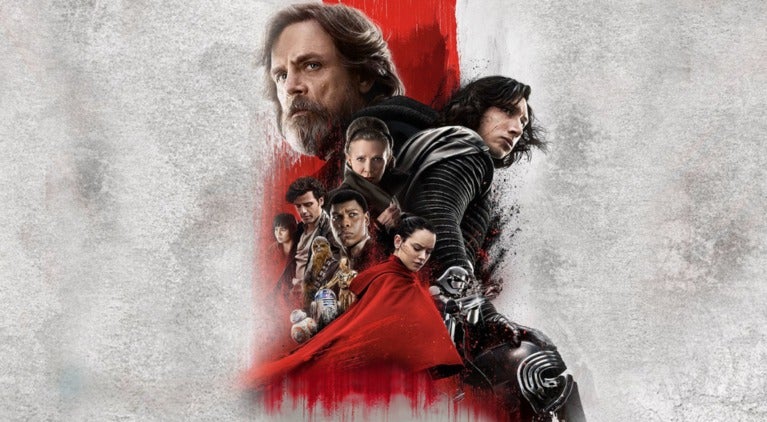 For The Resistance fighters, the entire runtime of The Last Jedi is about one thing, and one thing only: survival. That desperate race leads to a final stand on Crait, where Leia, Finn, and Poe try to lead their remaining forces in a strike against the First Order squadron that comes pounding at their door.

Finn nearly sacrifices himself to take out the First Order 'battering ram canon,' only to be saved at the last second by his new love interest, Rose. When things look their darkest, it's Poe who finally realizes what both Leia and Vice Admiral Holdo were trying to teach him all along about the difference between being a hotshot and being a leader: valuing the lives of his people.

Instead of trying to take on the First Order head-on, Poe looks to escape so that they can live fight another day. The Resistance gets a helping hand from the Vulptex ice foxes living on Crait. The Vulptex pack leads Poe, Finn, Leia and co. to a secret escape hatch from the base - the only problem is that it's walled-up with rocks.

The story threads fully converge when Rey, flying the Millennium Falcon, tracks her friends to the outside of the base on Crait, after escaping from Snoke's command ship after her pivotal confrontation with Kylo Ren. Arriving at the Crait base, Rey finds the avalanche of rocks blocking the escape path, and trapping her friends. Taking the lessons Luke taught her, Rey accesses her Force power and is able to lift the rocks out of the path, saving her friends' lives.

The Last Jedi ends with Rey, Finn, and Poe united in leadership of The Resistance, with Leia (and presumably Luke's Fore ghost) guiding this new generation along. With a real military leader (Poe), a fledgling Jedi (Rey), and First Order defector as a symbolic hero (Finn), The Resistance has the proverbial spark it needs to light the fire that burns down The First Order.

However, with Kylo Ren now the Supreme Leader of The First Order, and his Knights of Ren still lurking somewhere in the galaxy, these new leaders of The Resistance have quite a big fight in front of them.

In curious epilogue, we see that young boy in the stables on Canto Bight, suddenly reveal that he has Force powers, suggesting that the Force has plans for the Jedi to continue.

Star Wars: The Last Jedi is now in theaters. For more about the movie and its secrets, check out our official page!