When writing a series for over ten years, selecting a favorite moment can be difficult. With over 160 issues under his belt and almost 90 episodes on television, Robert Kirkman has crafted a lot of emotional, intense, heartbreaking, and sometimes triumphant moments for his characters.

"My mindset is that I don't like any of them, and every month I'm trying to do a good one" Kirkman said. "That's the kind of the thing that keeps me going, like, 'I'm going to try harder and make this one better.' So, I like to think that every issue is better than the last, but I know that's not the case."

Still, through the years, Kirkman is able to boil down all of the moments he has crafted into one specific favorite.

"I guess if I had to pick one favorite moment in the story, it's probably issue 50 where Carl and Rick are alone after the prison attack, and Rick is seemingly dying, and it's just an entire issue of Carl trying to survive on his own, and thinking he can't survive on his own until realizing that he really can," Kirkman said. "That was a fun story and a big turning point for Carl, and I actually got to write that episode in the show, so that was a lot of fun too. Thinking back, maybe I'd pick that one." 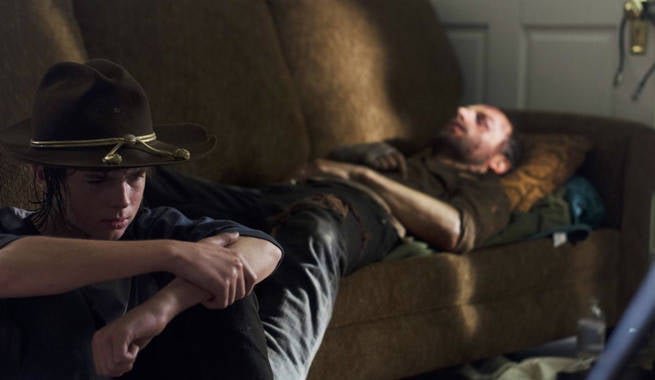 The moment was realized with a slight variation on The Walking Dead TV series but Seasons 4 and 5 saw the growth of Carl similar to that of the comic series. Carl has long been the subject of debate among Walking Dead fans. Some see the story unfolding with Rick Grimes as the centerpiece but others will argue that it has been about Carl from the very beginning.

With Rick Grimes set to die "eventually," according to Kirkman, Carl Grimes better be ready to take on the torch as leader of the new world.

The Walking Dead airs Sundays at 9 p.m. ET on AMC. For complete coverage and insider info all season long, follow

Robert Kirkman Reveals His Favorite Moments From The Walking Dead

Fear the Walking Dead Exclusive Clip: A Stranger From PADRE?

Fear the Walking Dead Showrunner on SPOILER's Death: "We Want It to Hurt"