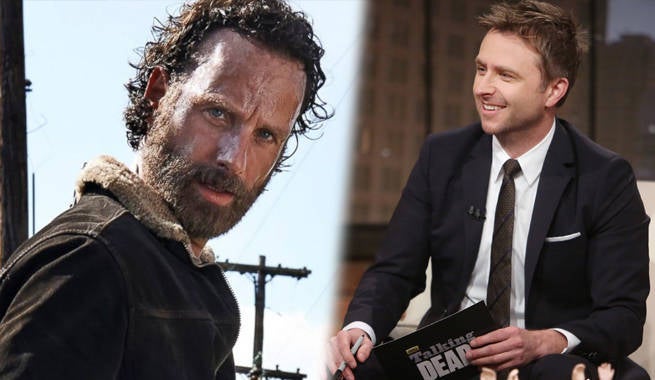 A complete list of Emmy nominees for the 2016 awards were released on Thursday and among them were several nominations for The Walking Dead, Fear the Walking Dead: Flight 462, and Talking Dead.

While no actors from The Walking Dead were nominated for any awards despite some very impressive performances in the show's sixth season, especially from Andrew Lincoln, Melissa McBride, and Lennie James, the series did make its way onto a couple of lists.

Competing with Better Call Saul, 11.22.63, Hannibal and Sherlock: The Abominable Bride, the AMC zombie series earned a nomination for Outstanding Special Visual Effects In A Supporting Role. The other nomination came for in the Outstanding Prosthetic Makeup For A Series, Limited Series, Movie Or Special category where it is listed against All The Way, American Horror Story: Hotel, Game of Thrones, and Penny Dreadful.

Fear the Walking Dead did not earn any nods itself but its short spinoff series, Flight 462 earned some recognition and several nominations. The 16-part webisode is nominated for Outstanding Short Form Comedy Or Drama Series category and its lead actress Michelle Ang earned a nomination for Outstanding Actress In A Short Form Comedy Or Drama Series.

The Chris Hardwick hosted Talking Dead recap show also made the cut, earning a nomination in the Outstanding Interactive Program category. Hardwick took to Twitter to congratulate his team.

The Emmy Awards will be held on Sunday, September 18 on ABC.