The Walking Dead's seventh season has been a slow build to Rick Grimes' rise back to power. Starting with the show's hero being completely stripped of his role as leader and forced into submission by Negan and his Saviors, Season 7A ended with the first shades of Rick Grimes finally launching a rebellion.

With a two-month break ahead of us, the big question of the off-season (aside from "Who is watching Alexandria?") is when will Rick finally fight Negan once and for all?

Well, based on the events of The Walking Dead comics and the pacing of the show in equivalent moments, it's safe to say it will be a while before the two leaders of the apocalypse show down.

The Walking Dead Season 7A skipped around a bit but ended with a storyline equivalent to that off iszue #111. Issue #108 and #105 were both covered thoroughly in the mean time, with issue #138's introduction of the Oceanside community being largely altered along the way.

Season 7 started with the infamous moments of issue #100.

On average, The Walking Dead covers about 20 issues in a single season -- sometimes more, sometimes less. With Season 7, although we are already at an equivalent to issue #111, the safe bet is on less by Episode 7x16. Rather than following Rick and Negan's adventures like the comics largely chose to at this point in the story, the AMC series has been dedicating entire episodes to characters like Tara and Daryl (who has never existed on the pages).

The Walking Dead will see a long March to War story arc as Rick rallies Alexandria, the Kingdom, and the Hilltop to take on the Saviors, assuming the show continues to follow the books. Of course, there will likely be a few curveballs along the way, delaying the realization of All Out War on television in favor of further character development, making the inevitable character losses during the war more devastating.

So, back to the topic at hand -- when we will finally see Rick and Negan fight to the death? 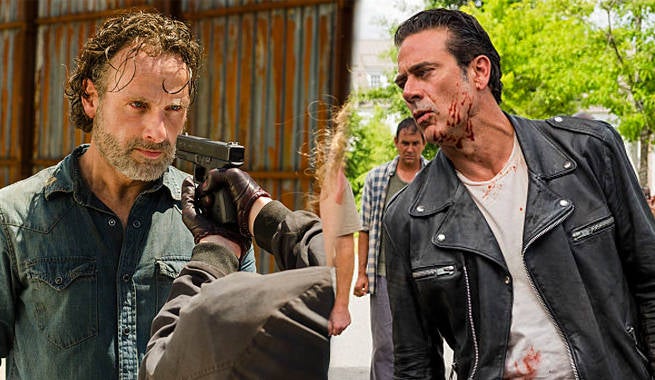 Season 7 will likely end with the launch of the All Out War storyline. The first real battle between Rick and Negan will likely take place before the season ends but it will be far from their last. In the comics, Rick rallies the communities to head straight for the Sanctuary where it is revealed that Gregory has been captured and aligned himself with the Saviors to keep his life. Still, a battle ensues, and while there are a few tragic losses, the war is not decided. Instead, the battle is brought to Alexandria's doorstep and Negan tosses grenades into the Safe-Zone, destroying their homes and claiming lives.

Either of these stories can possibly take place in the Season 7 finale, depending on how quickly the story is told.

Assuming the former scenario launches us into Season 8, we will be on pace for a brutal and action-packed 16-episode run from the Fall of 2017 to the Spring of 2018, culminating with Rick and Negan having it out on a battlefield in front of their respective armies.

With a Season 8 finale featuring the showdown between Rick and Negan, the landscape will once again be changed heading into Fall 2018's Season 9 which would call for a significant time jump during the off-season.

The Walking Dead returns for the second half of Season 7 on February 12, 2016. For complete coverage and insider info all season long, follow @BrandonDavisBD on Twitter.

The Walking Dead: When Will Rick And Negan Finally Fight Once And For All?