Bryan Edward Hill refuses to live in a world where any concept is too big or wild for KISS, which of course makes him the perfect guy to take on the legendary rock band in Dynamite's upcoming KISS: Blood and Stardust.

Hill, the writer on DC's The Wild Storm: Michael Cray, is coming off a well-regarded arc on Detective Comics, which sets up his forthcoming series Batman and the Outsiders. Meanwhile, he is working as part of the writing staff on DC Universe's forthcoming Titans series.

Hill joined ComicBook.com for a quick and dirty five question Q&A about the project, what appeals to him about working with KISS and Dynamite, and his dream KISS team-up. You can read it below, along with checking out some exclusive preview pages from the series, which launches on October 24.

Reading the synopsis for this series, the first thing I thought was that most other pop culture brands could not withstand the weight of the high concept. Is there any story too big or wild for KISS?

I refuse to live in a world where that could be true. [Laughs] 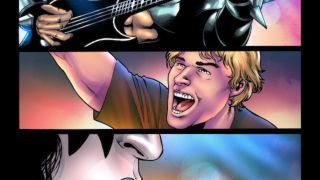 When Dynamite approached me, my first question was "Well, what the HELL is a KISS book, anyway? What's the expectation of experience?" To which I got the response "there isn't really. Just do something rock and roll."

So that's demon warriors and evil rock singers going up against a resurrected KISS with powers that come from a demonic goddess.

That seemed about right.

You're a busy man right now. What brought the series onto your radar?

Nick Barruci and I have known each other for years and we've spoken about working together. This seemed like such a crazy idea, ME writing a KISS story, that I had no choice but to do it.

I love making a meal out of something that doesn't make sense initially, and then surprising people with what I can do with a story.

What was your introduction to KISS?

Gene's gonna kick my ass, but probably Scooby Doo. I was really into 60's rock growing up. Hendrix and the like. Zeppelin was something I listened to a great deal. Bowie. I came to KISS later, as a kid in the eighties, because EVERY school in the 80's had that one kid that was really into Gene Simmons.

I honestly knew Gene more as an actor. Have you seen Runaway? He's brilliant in it.

Later on, I found the music and it's fun, more dynamic than a lot of people recognize.

Is there an even bigger threat implied then the band knows about? I feel like when you deal with a demon they rarely shoot straight.

The scope of the threat gets bigger and bigger. This is really the beginning of a potential universe here. Plenty of directions could travel.

So now that they have teamed up with Vampirella and Scooby-Doo, I gotta ask: if you could write KISS in any team-up, practical considerations be damned, who would they team up with?

If I ruled the world, I would team them up with Batman.

Hogwarts Legacy Fans Surprised With Freebies Ahead of Release