Mera is finally taking over the spotlight, and she's bringing along some talent from Aquaman.

For those who read Dan Abnett's Aquaman series, you know that Mera is a critical part of why that book works so well. Now Abnett is giving the powerful hero her own 6-part solo series, with artist Lan Medina taking care of the visuals (via Newsarama). While Medina will be handling the interiors, the talented Nicola Scott will be taking care of the covers, and issue #1's cover is just as stunning as you'd assume.

Scott shared the first cover and couldn't be happier with being a part of Mera's first solo venture. "That's right everybody, MERA is coming in February and I get to do the covers! 💚 Her First-Ever Solo," Scott said.

The current run of Abnett's Aquaman features Arthur trying to escape an Atlantis that ousted him as their king and brought in Corum Rath to lead instead, a move that has resulted in plenty of civil unrest. Mera has been working alongside Tempest and the Justice League to find a way to bring down the crown of thorns surrounding Atlantis to get Arthur out, and it appears things will get even more hectic in Mera's solo series.

The book will take place during an Atlantean civil war, one likely between Arthur and his supporters and the leadership that put Rath in power in the first place. It will be crazy, but should also be quite entertaining.

You can find the new cover in the gallery, and the first description is included below. 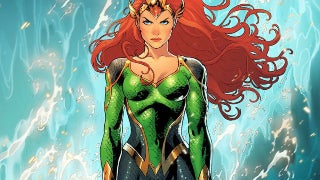 From the pages of AQUAMAN comes a brand-new adventure starring Mera, in her own title for the first time ever!
As the brutal Atlantean Civil War rages, Mera must keep the peace between the surface world and Atlantis as its newly anointed queen in exile. But when Aquaman's brother Orm, a.k.a. Ocean Master, learns of his homeland's fate, he'll stop at nothing to return to Atlantis as its king and savior!
On sale FEBRUARY 28 • 32 pg, FC, 1 of 6, $3.99 US • RATED T