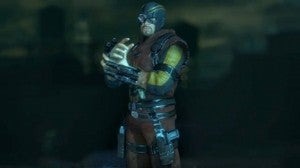 In DC's just-released Suicide Squad #1, sniper-for-hire Deadshot explains to the reader that he ended up in Blackgate Prison (and, by extension, in the Squad) after an attempt on a Senator's life was foiled by Batman. Apparently, Deadshot is itching for some payback by way of Rocksteady's upcoming Batman: Arkham City video game. A story at MTV's Multiplayer blog reveals this piece of art from the game, showing a version of Deadshot's costume that's somewhere in between what he looked like in Gail Simone's recently-concluded Secret Six run and what he looks like in his current incarnation in the new DC Universe. The piece also announcing that the six bat-gadgets players could unlock throughout the original Arkham Asylum game has now been doubled to 12 for the sequel. I wonder if there's a playable version of Bat-Shark Repellent?

Supergirl: Lex Luthor Gets a Rude Awakening in "I Believe In a Thing Called Love" Clip (Exclusive)