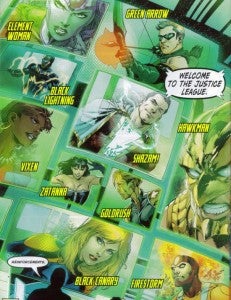 Today's issue of Justice League -- #16, by Geoff Johns and Ivan Reis -- "Throne of Atlantis" escalated and fans got a look at one of the time-tested strategies employed by almost every Justice League in recent memory when they start to lose a fight: Recruit. The page at left shows the League reaching out to a number of promising candidates in the hopes of bringing order to the chaos of the League's war with the forces of Atlantis. So who are these people, what are they doing now, and what are the odds they could be swayed to join the Justice League? Element Woman It's not clear how closely tied she'll be to the version that showed up in Flashpoint, but we've known she was coming on down the pike for a while. After all, her distinctive face showed up alongside a number of these other characters on a promotional image for the launch of The New 52. Also featured on that cover? Firestorm, Green Arrow and Hawkman, among others.

Green Arrow Besides having appeared on that promotional image, Green Arrow hasn't been much of a team player so far in the New 52. That doesn't mean he won't be--and it seems likely that this story might lead directly into the formation of the Justice League of America by putting Green Arrow and Hawkman together for the first time. What might drive them away from the all-star League and into the embrace of Steve Trevor's gang of also-rans? We'll have to wait and see. Black Lightning Currently appearing over in DC Universe Presents alongside Blue Devil, the character might be the first one whose appearance in that doomed anthology series was actually a precursor to an expanded role in the new DCU. Shazam He's kind of obvious, right? I mean, he's been appearing in the backup features for the comic. Who's appearing in the upcoming Justice League of America backup features? Manhunter, who's a part of the team from issue #1. Vixen So, apparently she's doing better? The last time we left her, she was either in a coma or so recently recovered from it that it made no odds. Good to see someone from the Justice League International represented; that book and those characters deserved better than they got. Hawkman Another face from that promotional poster, and another guy who's on Justice League of America. Probably a similar trajectory to Green Arrow; don't be surprised if they say no, but also don't be surprised if they help out against the Atlanteans and then bail on the team at the end. Zatanna Her involvement with Justice League Dark makes her the easiest sell in-story, doesn't it? After all, they're meant to be there for when the League hits a supernatural snag it can't handle on its own. The fact that they've gone off on their own tangent with their own separate mission statement is more a byproduct of them having their own title; if that were cancelled tomorrow, those characters would likely all become recurring (but not regular) cast members in Justice League or Justice League of America. Goldrush No idea who this is. Looks as though they've either created a new character out of whole cloth or at least have reimagined someone like Goldface or Gold from the Metal Men to such an extent that the character won't be recognizable until we get a little backstory. Although he looks a bit like Peter Platinum, a 1,000th Century hero whose mercenary sensibilities are derived from a misunderstanding of Booster Gold's mission statement. That character is also a Johns creation, so maybe there's a connection. Black Canary Another for the "she might help out, but it seems unlikely she'll join up" pile. Black Canary is currently pretty busy with the Birds of Prey, but if either the Justice League or the Justice League of America wanted to use some of their pull to help her get her personal life a bit more in order, it might be enough to lure her in for a dance or two. Firestorm A perennial Justice League reservist, Firestorm is also featured on that ancient promotional image. His own series has never really found a sales groove, although creatively Dan Jurgens has turned it into the comeback story of the New 52. There's always a bit of trepidation when a character like that starts showing up in other titles, though; he's been featured in Teen Titans recently and now this. Could they be positioning the character to join a team if his own book folds? Hard to say. In any case, the way the character has been portrayed so far it's hard to imagine him as Justice League material just yet; he might be better off with the Titans. But certainly, like Zatanna, he could have enormous one-time value against the Atlanteans so it makes sense to invite him in.